Last week’s NFL betting lines seemed to forecast another competitive week of football. Up until Saturday night, Week 7’s heaviest favorite was laying only 6.0 points. If that held, Week 7 would have become the first week since at least 2002 with zero teams favored by 6.5 or more. Dallas settled as 6.5-point favorites at San Francisco, making Week 7 only the third week in at least 15 years with zero teams favored by 7.0 points or more. Fourteen of the week’s 15 games had lines between 3.0 and 6.5.

So much for those low point spreads. Week 7’s average margin of victory (14.0 points) was 14th-highest for a single week since 2012 (that’s 109 regular-season weeks) – bad but not terrible, I suppose. Only four of 15 games were decided by seven points for less (27%) – the 6th-lowest percentage over the same period. If you like close games, then that’s also bad, though not necessarily worth a few paragraphs.

But Week 7 was, by some measures, historically bad. Its crime was the yin to Week 3’s yang. Whereas Week 3 delivered a record number of high-scoring thrillers, Week 7 gave us a record number of low-scoring blowouts. Six games combined fewer than 34 total points with a margin of victory of 14 or more. We’re talking scores like 17-3, 21-0, 23-7, 24-7, 27-0, and 33-0. Good luck finding a silver lining there. 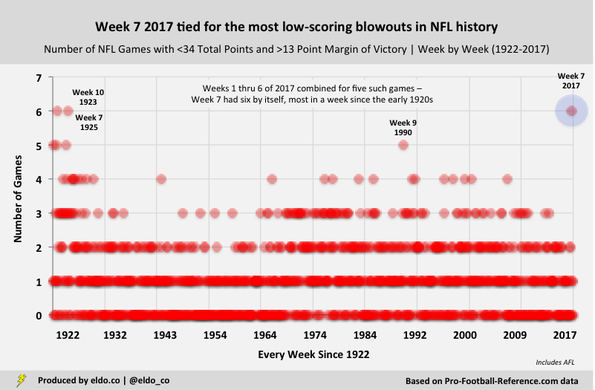 There's no single way to define "low-scoring blowout" – but you get the idea​
The week is, of course, more appropriately evaluated in context of how many games are played. There are more teams and games nowadays than there used to be, and we want to control for byes, too. Measured as a percentage of games played in a given week, Week 7 had the highest proportion of low-scoring blowouts (40%) since Week 4 of 1959, when three of the NFL’s six games fit these criteria (50%). 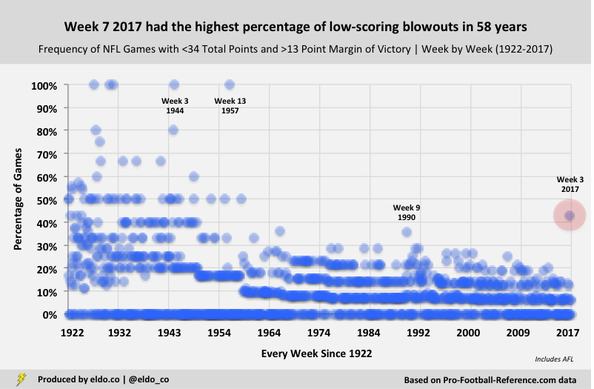 Looking Back at Week 7’s Picks

Favorites bounced back after a terrible Week 6 to win 12 of 15 games outright and go 9-4-2 against the spread. But that didn’t do much for the models, and they struggled mightily in Week 7. Jeff Sagarin’s Offense-Defense Method Predictions was the only model of the five covered here to finish above .500 against the spread. The three-model machine had its second-worst week of the year, going 6-8-1 ATS.

Seems like the type of week in which blind luck would fare better, right? Not here. Our random picks – made by flipping a coin – did even worse than the models, with a record of 4-10-1 against the spread. 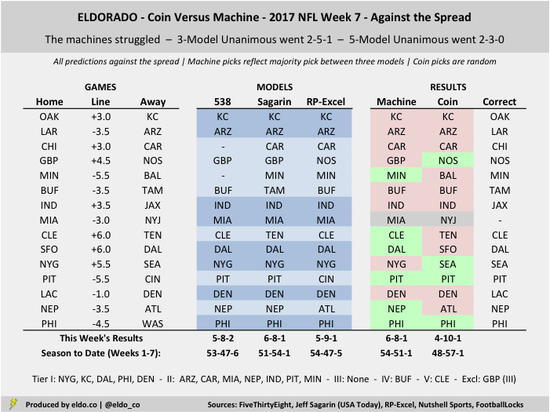 If we’re looking for some consolation, we could probably argue the Giants and Packers off the board given their recent injuries are generally not factored into the models, which therefore tend to the like them with the extra points they’re getting. The Giants lost in Tier I; the Packers lost as a would-be Tier III. 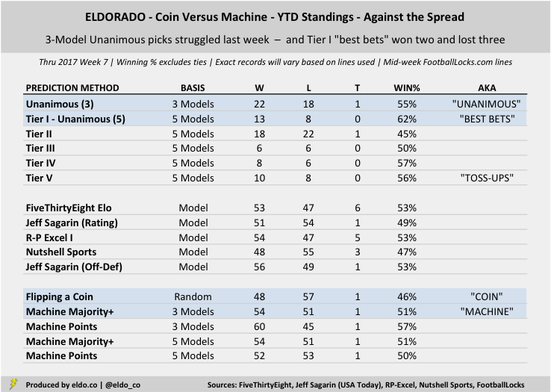 Looking Ahead to Week 8’s Picks

If Week 7’s betting lines were tight, Week 8’s strike a different tone. Four of this week’s 13 games carry favorites of 9.0 points or more. Two weeks ago, five games had favorites of 9.0 or more. Over the course of the entire 2015 and 2016 seasons, the most such favorites we saw in a single week was three.

Along similar lines, three weeks this season – Weeks 2, 6, and 8 – have had higher average betting lines than every single week in 2015 and 2016. So while this season has given us the second-lowest average lines in 15+ years (Week 5) and a week with zero teams favored by 7.0 or more (Week 7) – both of which suggest parity – it’s also given us some of the most lopsided weekly point spreads of the past few years.

The three main models agree on four games this week – Minnesota (-9.5) versus Cleveland (in London), Philly (-13.0) versus San Francisco, Indy (+10.5) at Cincinnati, and New England (-7.0) versus the L.A. Chargers. They’ll try to bounce back after a tough go for three-model unanimous picks last week.

Of these, the Vikings, Eagles, and Patriots are five-model unanimous picks, or Tier I “best bets.” (Kansas City also qualifies as Tier I given four models agree and one has them right at -7.0, the current line.) 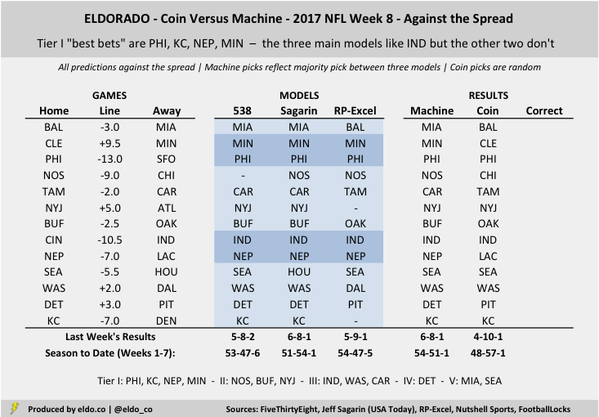 Tiered picks are based on the five models listed below (methodology)​
The lines to watch out for – depending where and when you’re looking – are as follows. The three-model majority selection is New Orleans laying 9.0 or 9.5, but it flips to Chicago at 10.0; Carolina at plus 2.0 or 1.5 but Tampa at 1.0; and the New York Jets at plus 5.0 or more but Atlanta at 4.5 or less.

Buckle up and enjoy Week 8!

The five models referenced are created by and sourced from FiveThirtyEight ("Elo"), Jeff Sagarin via USA Today ("Rating" and "Offense-Defense Method Projections"), RP-Excel.com ("R-P Excel I"), and NutshellSports.com ("Nutshell Sports NFL Ratings"). Lines are sourced from FootballLocks.com as of Oct 27 at 11pm PT. Data was compiled and analyzed by ELDORADO. All charts and graphics herein were created by ELDORADO.