As of Thursday night, four Week 10 teams are favored by 9.0 points or more – Pittsburgh (-10) at Indy, Detroit (-12) versus Cleveland, the L.A. Rams (-12) versus Houston, and Carolina (-9) versus Miami. There were four such favorites in Week 6 and three in Week 8. Prior to this season, we hadn’t had four teams favored by 9.0 or more in one week since Week 17 of 2014. There have already been 18 of them this year – last year there were 19 total across the entire regular season. Let’s see if the Carolina line holds.
Looking Back at Week 9’s Picks

Week 9 was relatively unremarkable on the Coin versus Machine front. The machine (three-model majority) went 6-6-1 against the spread, the coin went 7-5-1, and the models were all around .500.

Houston and Green Bay both lost as would-be Tier II selections, but they were excluded due to their QB injuries (which the lines factor in but the models do not). Absent those games, Tier II picks went 4-2-1, good for their second-best week of the season. But those exclusions are baked back into the broader YTD standings (below), so Tier II didn’t pick up any ground and continues to drag on the year at 23-27-3 (46%). [At some point I’ll look back all of the potential exclusions to see what it’d look like without them.] 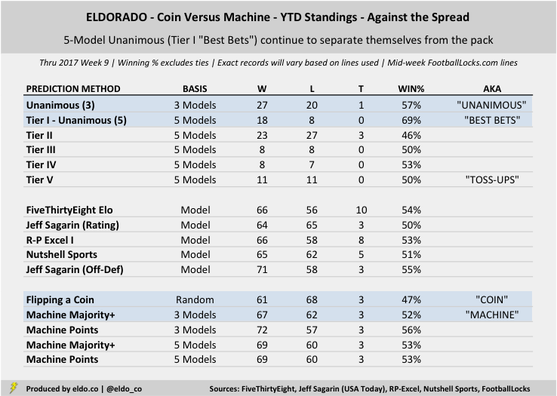 Looking Ahead to Week 10’s Picks

But beware of fool’s gold. Three of the four Tier I “best bet” teams are missing key players, including Tampa Bay (Jameis Winston is out), Green Bay (Aaron Rodgers is out), and Dallas (Zeke Elliott is suspended). Those absences are factored into the lines but are new news (Winston, Elliott) or still haven’t quite flowed through (Rodgers) to the models. Same goes for Arizona (Tier II), Houston (Tier II), and the N.Y. Giants (Tier III). [Rather than mark so many teams for “exclusion,” I asterisked these teams this week.]

Tiered picks are based on the five models listed below (methodology)
​
Good luck and enjoy Week 10!

The five models referenced are created by and sourced from FiveThirtyEight ("Elo"), Jeff Sagarin via USA Today ("Rating" and "Offense-Defense Method Projections"), RP-Excel.com ("R-P Excel I"), and NutshellSports.com ("Nutshell Sports NFL Ratings"). Lines are sourced from FootballLocks.com as of Nov 9 at 5pm PT. Data was compiled and analyzed by ELDORADO. All charts and graphics herein were created by ELDORADO.