The granddaddy of all NFL action is the spread bet. Indeed it’s likely one of the few forms of action your actual granddaddy was able to partake in, if he was into that kind of stuff and knew the right (wrong?) people. Maybe there was some guy at your high school who took these kinds of bets. They’ve stood the test of time. But spread bets aren’t profitable. You will lose money – if not right away, then eventually.​
​To the unfamiliar, here’s an example of how an NFL spread bet works. On Sunday night, the Dallas Cowboys are 4.5-point favorites at home against the New York Giants. If you pick Dallas to win “against the spread,” they’ll need to win by five points or more for you to win the bet (“Dallas -4.5”). If you pick New York, you win if the Giants win the game outright or lose by four points or less (“Giants +4.5”).

In a typical spread bet, you risk 10% more money than you would win (-110), known as a 10% “vig.” Bet $110 and win, and you get $100. Bet $110 and lose, and you lose all $110. Historically, sportsbooks would set and adjust point spreads to attract and maintain equal action on both teams, assuring themselves that difference, which equates to 4.5% of the total amount wagered. Not a bad setup for the books.

The evidence suggests that sportsbooks have grown increasingly comfortable straying from that 50-50, guaranteed-profit balance. When they do so – that is, when they set lines that attract significantly more money on one team – they’re effectively betting on the other team. Earlier this year, certain books allowed big imbalances in nine of 10 NFL playoff games. The books lost all of them against the spread.
​So the betting public had a good run in January. And I’m sure there are pick outfits out there with solid track records. There’s probably even some that can claim consistent outperformance, the way certain investment funds do. Year after year after year, bell curve after bell curve after bell curve, someone’s going to get lucky and keep showing up at the front end of the curve. Shout out to the Wyatt Earp Effect.

But check out how difficult it is to make money picking NFL games against the spread. The chart below shows the results of an actual 2016 NFL pick’em pool, in which 60 random people picked every game against the spread. Thirty-two of the 60 picked more than 50% of the games correctly. Not bad. But had everyone wagered real money on every game in equal amounts, only 14 would have netted a profit. 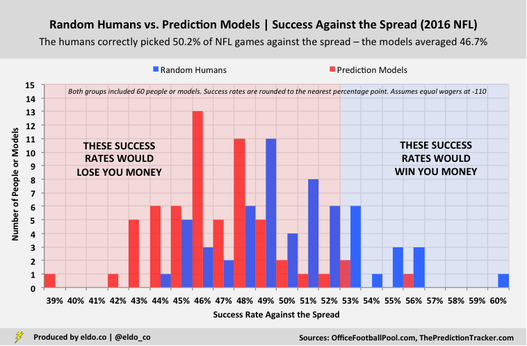 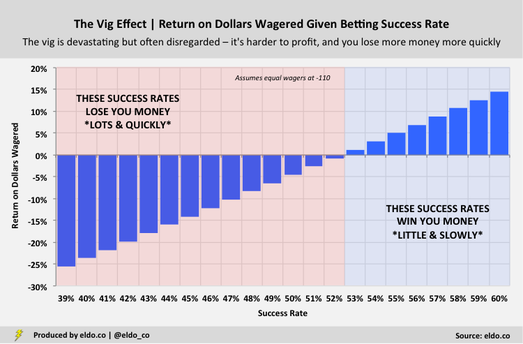 All of this is thanks to that 10% vig. We all know it’s there, but we kind of pretend it isn’t, and we casually chalk it up as the cost of doing business. Ask your buddy how much he has on the Patriots, and he’ll almost always say “$100” or “$50,” not “$110” or “$55,” which is really what he’d lose. If he wins one bet and loses another, he’ll probably tell you he went one and one on Sunday, not that he lost money.

There’s nothing special about the math. Sometimes you just have to see it on paper. Of course, not everyone puts money on every game. Bettors often target a few games, or even a single game. But even then, one man’s “best bet” is another’s “trap of the week,” and over a long enough period, it all comes out in the wash. (Maybe a few legendary sharks aside. Another shout out to the Wyatt Earp Effect.)
We’re human, though, so what do we know? Surely the fancy algorithms must be better. Not so fast. ThePredictionTracker.com tracks over 70 NFL prediction models in terms of both outright winners and results against the spread. Last season, our random group of 60 dudes had a 50.2% success rate against the spread. The 60 models that picked at least 250 games had an average success rate of 46.7%.

To be completely fair, it was a down year for the models. Their average 5-year success rate is 50.4%, and their average 10-year success rate is 50.6%. As much as I’ve always enjoyed various prediction models, even those success rates beg the question – all that work when we can just flip a coin? So let’s flip.
Over the course of the 2017 NFL season, I am going to track the performance of three prediction models, showing their unique picks, consensus picks, best bets, and toss-ups on a weekly basis. Rather than pick against them myself – “man versus machine” – I am going to flip a coin. Thus coin versus machine.

One season isn’t going to tell us which methods are superior. In all likelihood (and over a long enough period of time), none of them is. The coin could be lucky or unlucky, just like you or me or our friends or the experts or the fancy models. But it will be interesting to track, and we’ll have a little weekly fun with it, breaking down the games and trends and the models’ fortune and misfortune along the way.

Check back in a few days for a Week 1 review and a look ahead at Week 2.