Real quick because we're playing catch-up. Two big headlines from last week. First were the heavy favorites. Five teams were favored by 9.5 points or more - the most such "heavy favorites" since Week 17 of 2014 (and the most for a non-Week 16/17 since Week 8 of 2013).

Those five teams went 3-2 against the spread (ATS). The Eagles, Falcons, and Patriots covered, and the Chiefs and Steelers didn't. There's been some chatter about good teams covering high spreads this season, but that's mostly hogwash. So watch out for the hype.

Let's keep it quick here too in the interest of time. The models mostly sucked wind in Week 12. As a group, the three-model majority pick hasn't gone more than two games over .500 ATS since Week 5. And it's 44-49-6 ATS over the span. Two games worse than our coin-flip.

As weekly readers know, the real horse in this race has been the five-model majority picks (Tier I "best bets"). They went 2-3 against the spread last week, having lost with Dallas, New Orleans, and Detroit and won with Green Bay and Seattle. Those picks are now 24-14-1 ATS. 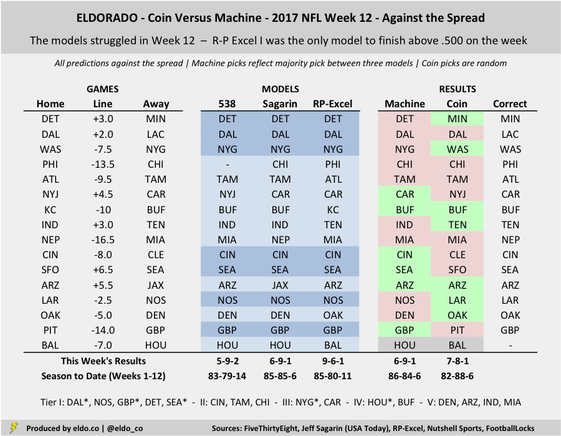 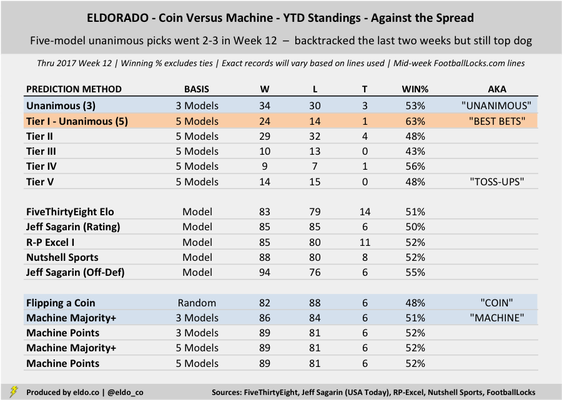 Looking Ahead to Week 13’s Picks

The models are very top heavy in Week 13. Chicago, Houston, Green Bay, Detroit, Miami, and New Orleans are all Tier I "best bets" against the spreads listed below (meaning they're either five-model unanimous or four-model unanimous with one spot-on implied line). 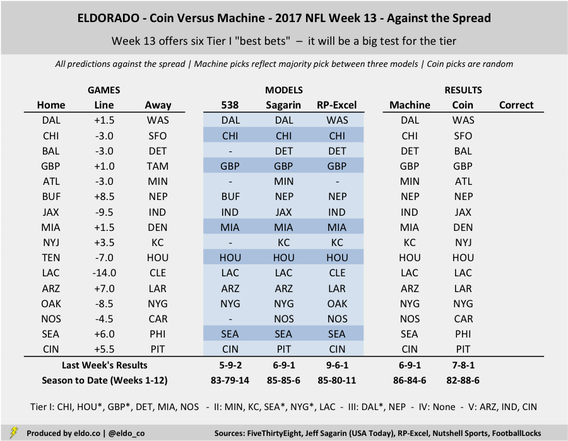 Tiered picks are based on the five models listed below (methodology)​
Good luck and enjoy Week 13!

The five models referenced are created by and sourced from FiveThirtyEight ("Elo"), Jeff Sagarin via USA Today ("Rating" and "Offense-Defense Method Projections"), RP-Excel.com ("R-P Excel I"), and NutshellSports.com ("Nutshell Sports NFL Ratings"). Lines are sourced from FootballLocks.com as of Nov 30 at 3pm PT. Data was compiled and analyzed by ELDORADO. All charts and graphics herein were created by ELDORADO.