Nine of the NFL’s 16 games were decided by seven points or less, while five were won by 20 points or more. Both figures are a little above average – and the divergent outcomes made for something of a close game-blowout barbell – but it was nothing too out of the ordinary. The week’s average margin of victory (12.2 points) was dragged up by Houston’s 43-point win (the median was seven) and its average point total (44.7 points) was pretty standard for modern play.
Looking Back at Week 4

The three-model machine had its worst week of the year, winning six and losing 10 against the spread. The models did well in the six games they agreed on (4-2) but otherwise performed quite differently. R-P Excel looked very good for the third straight week (10-5-1) and is in familiar territory toward the top of the leaderboard on ThePredictionTracker.com. FiveThirtyEight (Elo) and Sagarin (Ratings) won six apiece against the spread. The coin won nine. 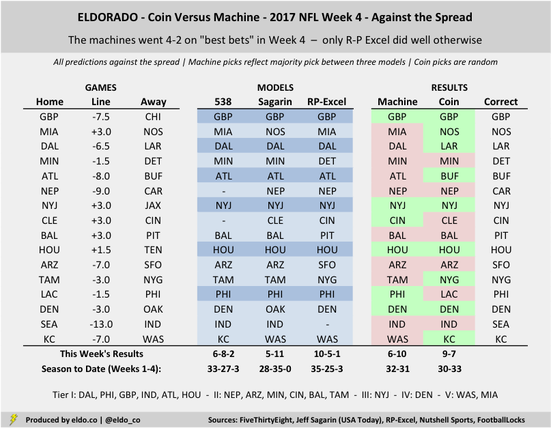 The Importance of Your Betting Lines
​(Down to the Half-Point)

Let’s pause to unpack these numbers and get a sense of how fickle they can be. First, betting lines vary from pool to pool and place to place. In Week 1, the Broncos beat the Chargers 24-21 in the week’s second Monday Night Football game. The line opened the week at Broncos -3.5, danced down to -2.5 at certain shops, and generally settled at -3.0 by Monday. People who bet on Denver minus the points either lost, won, or pushed, depending on where and when they got in. (Likewise for folks who took the Chargers.)

A lot of Pick’em Pools use early-week spreads to allow users to log in and make picks well ahead of Thursday night. So we end up with some notable line disparities each week. In Week 4, for example, a lot of pools had Dallas (-8.5) against the Rams, which is roughly where the line opened the week. By kickoff, the line had gone down to Dallas (-5.0) – over three points below where it started. It didn’t end up mattering because the Rams won the game outright, but using fixed early-week lines influences decisions and results.

Line moves matter to the machines, too. Sometimes the game outcome lands right in the middle of where the line was hovering all week, as in the Broncos-Chargers example. But that’s only once in a while. For purposes of this exercise, the more important factor is which line is being entered in the first place.

Last week, two of the three main models liked Cincinnati (-3.0) at Cleveland. But at Cincinnati (-3.5) – which is where the line was in many early-week Pick’em Pools – the majority preference was Cleveland. The models liked the Giants (+3.5) at Tampa Bay, but at +3.0 they’d have taken the Bucs. And as was highlighted in last week’s column, the models liked Kansas City (-6.5) hosting Washington, but at -7.0 they liked Washington instead.

When we’re working with three models, all those flip-flops mean is that one of the three prediction methods had its implied line right in between the half-point move (and the other two models were split on which team they’d take). So depending on which line is entered into the system to begin with – or as the line moves that all-important half-point – the machines’ two-out-of-three majority pick changes.

Going forward, I’ll be a little more proactive about calling out these borderline games and highlighting where (or at which betting lines) the models like each team. And as we continue to track the various stripes and types and tiers of picks – “best bets” through “toss-ups” and everything in between – I’ll highlight some alternative (and possibly more successful) approaches to dealing with these fickle lines.
Looking Ahead to Week 5

The three main models agree on seven of this week’s 14 games – the most three-model “unanimous picks” since Week 1. They’ve gone 13-8 against the spread in these games so far, which is good, so we’ll keep tracking that thread, too. Of those seven games, the only team all five models agree on is Kansas City (-1.0) at Houston, making the Chiefs the lone “best bet” of the week. (The models are 8-3 YTD on “best bets”).

I mentioned above that I’d highlight games that were dangerously close to flip-flopping based on the betting line, and there are two such games this week. As presented below, two of the three models like Jacksonville (+8.5) at Pittsburgh and Carolina (+3.0) at Detroit. But if you shave a half-point off of those lines, the majority pick becomes the two home favorites (Steelers and Lions, both as “toss-ups”). This week’s regular Tier V “toss-ups” are Tampa (+5.5), Arizona (+6.5), Green Bay (+2.0), and Chicago (+3.0).

Next week, we’ll explore the records for all of the models, tiers, and methods that are covered here, so we can take better inventory of what’s working – or tricking us into thinking it’s working – and what isn’t.

Until then, good luck and enjoy the week!