(1) Favorites went 6-10 against the spread (ATS) in Week 13 and 7-9 against the spread in Week 14, ending a six-week hot streak for them. It’s likely more coincidence than anything, but the season can now be neatly divided into three buckets with respect to favorites and underdogs: six weeks of underdog dominance, six weeks of favorite dominance, and now two weeks back to the underdogs.

(3) The Patriots were 11-point favorites at Miami on Monday night and lost the game outright, breaking late-season survivor-pool hearts around the country for a bunch of folks who were probably feeling pretty good about having held onto Brady and Belichick this deep into the season. I touched on this two weeks ago, but the Pats are now 1-5 against the spread this season when favored by 9.0 points or more. And they’re 3-3 outright in those games! The Patriots only 2017 losses have come when heavily favored.

The two five-model unanimous picks (Tier I “best bets”) were Green Bay -3.0 at Cleveland and Houston -3.0 versus San Francisco. As noted here last week, the first one felt good and the second didn’t, given the lines account for Jimmy Garoppolo but the models generally don’t. The Packers gave us a classic love-it-or-hate-it overtime touchdown cover, and Houston lost outright. The tier is now 28-18-1 (61%). That’s still really good, but it’s been between nine and 11 games above .500 cumulatively since Week 8. 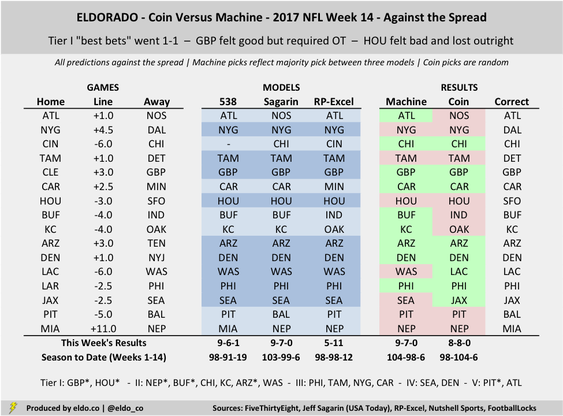 Looking Ahead to Week 15’s Picks

The Colts already lost on Thursday night as a unanimous pick, so it’ll be an uphill battle for both categories on Saturday (two games), Sunday (12 games), and Monday (one game). As always, watch out for injuries that the lines factor in but the models do not. The Eagles, for example, are a five-model unanimous pick but lost starting quarterback Carson Wentz. (I still feel good about them at -7.5.)

For what it’s worth, New Orleans - 15.5 versus the Jets is the second-highest line of the season behind New England -16.5 versus Miami in Week 12, which the Pats covered – their only cover, as mentioned, against a line of 9.0 or more in six such games this season. Funny how the Jets went from being considered “feisty” to a total rollover thanks to a bad Sunday in Denver, which now looks strangely inspired. (I personally think that 15.5-point line is a bit of an overreaction. But we shall see!) 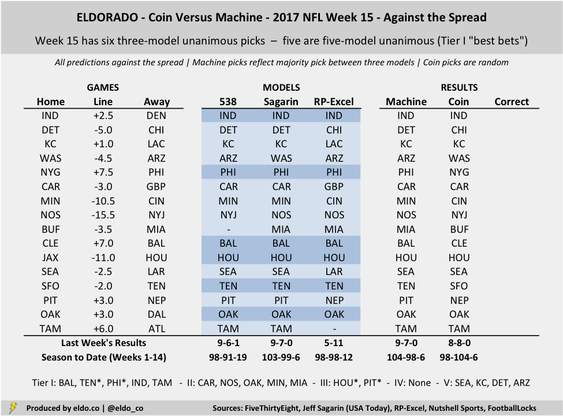 Tiered picks are based on the five models listed below (methodology)​
Good luck and enjoy the week!

The five models referenced are created by and sourced from FiveThirtyEight ("Elo"), Jeff Sagarin via USA Today ("Rating" and "Offense-Defense Method Projections"), RP-Excel.com ("R-P Excel I"), and NutshellSports.com ("Nutshell Sports NFL Ratings"). Lines are sourced from FootballLocks.com as of Dec 15 at 5pm ET. Data was compiled and analyzed by ELDORADO. All charts and graphics herein were created by ELDORADO.