I also layered in two more prediction models, Jeff Sagarin’s “Offense-Defense Method Predictions” and David Wilson’s “Nutshell Sports” ratings, to produce five-model majority and five-model points picks. These followed the same logic as the three-model systems. The majority pick meant most (at least three) of the models liked a given team against the spread. The points pick factored in magnitude.

The individual models and deduced three- and five-model methods had success rates of 50.2% to 55.8% against the spread. That's pretty good, but when you factor in the vig, it's hardly a winning proposition. The sample size remains small, but the real intrigue has centered on Tier I "best bets," which went 34-22-2 against the spread (60.7% win percentage). But if only three games went the other way, that win rate wouldn't be so special. Exact lines are critical in determining tiers, too. Line movement can alter tiers and picks.
Looking Back at the Conference Championships

There were naturally only two games in the Conference Championship round, and the models did pretty well with them. They've had a good playoffs overall. FiveThirtyEight and Sagarin's "Ratings" method are both 7-3 against the spread in the playoffs; Nutshell Sports and Sagarin's "Offense-Defense" method are both 6-4; and R-P Excel I is 5-3-2. Three-model points, five-model majority, and five-model points are all 7-3 against the spread, while the three-model majority pick is 6-3-1. Lady luck (flipping a coin) has led the way at 8-2. 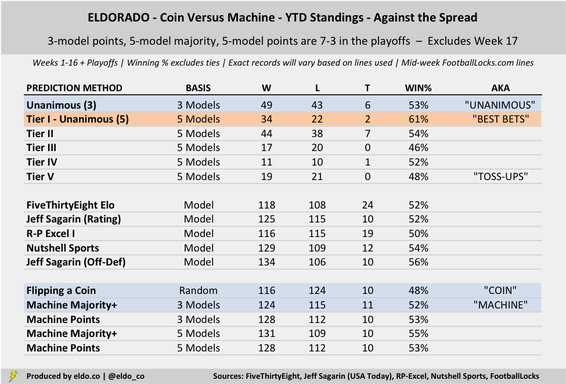 Looking Ahead to the Super Bowl

We're still awaiting R-P Excel's projection as of mid-day Friday, so for the first time all year, we actually don't have complete data for the Super Bowl. For the time being, I inserted a 55-model average from ThePredictionTracker.com as a placeholder for R-P Excel. On average, those 55 reporting models like the Patriots to win by 0.75 points (median 0.35), which suggests a pretty smooth cover for the Eagles.

FiveThirtyEight has the Patriots winning by 2.5 points; Jeff Sagarin's "Ratings" method has them winning by 1.4. Meanwhile, Nutshell Predictive has the Eagles winning by 5.0 points outright, and Sagarin's "Offense-Defense" method has Philly by 0.7. That last method was the only one of the five covered here to correctly pick Jags over Steelers outright in the Divisional Round. The four methods that have reported like the Eagles outright by 1.8 points (thanks in large part to Nutshell Sports). The four-model median is Pats by 0.4.

We'll see where R-P Excel comes in, but it looks like the Eagles +4.5 is going to be a Tier I "best bet" this Sunday. As noted above, Tier I "best bets" had a 60.7% win rate against the spread this season in 58 games. For added context, 52.1% of the 55 models currently reported on ThePredictionTracker.com have the Patriots winning outright, and only 39.5% like them to cover as a 4.5-point favorite. The predictions range from Pats by 15 to Eagles by 5; the aforementioned Nutshell Sports is most bullish on the Eagles among the 55 models reporting.

The Patriots opened around 6-point favorites, which has since come down, but the models seem to suggest that even as 4.5-point favorites, there might be a little too much Brady and Belichick and Patriots aura baked into the line. Will that experience help New England on Sunday? Or will Philly's far-superior defense make us look back and wonder why we all didn't jump on the Eagles plus the points (as some sports books have seen). Nobody really knows. That's why a lot of your friends will lose money. But it's also why we watch.

Tiered picks are based on the five models listed below (methodology)​
Enjoy the Super Bowl!

The five models referenced are created by and sourced from FiveThirtyEight ("Elo"), Jeff Sagarin via USA Today ("Rating" and "Offense-Defense Method Projections"), RP-Excel.com ("R-P Excel I"), and NutshellSports.com ("Nutshell Sports NFL Ratings"). Lines are sourced from FootballLocks.com as of Feb 1 at 4pm ET. Data was compiled and analyzed by ELDORADO. All charts and graphics herein were created by ELDORADO.