Let's start by looking at Pacino and De Niro's highest-rated titles according to users (audiences) on IMDb and Rotten Tomatoes, the two online ratings sites with the most reviews.[1] These are not the critics' ratings or reviews. This is the voice of the people: 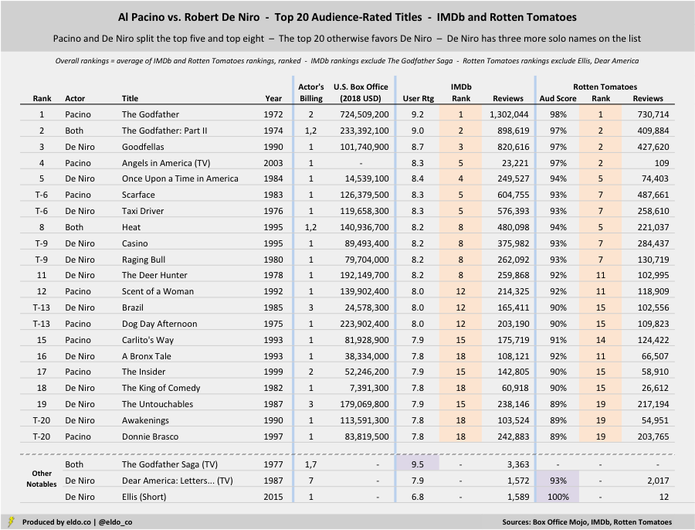 First, you might notice that IMDb's user ratings and Rotten Tomatoes's audience scores yield remarkably similar rankings. There's a 95% correlation in the rankings across the nearly 150 Pacino and De Niro titles that are rated on both sites. That phenomenon is evident in the list above.

Whether we're looking at box office receipts (previous section), online audience ratings (this section), or customized "Godfather Ratings" (next section), the numbers support the popular notion that Pacino's portrayal of Michael Corleone in The Godfather is the best performance by either actor in any role. And it gives Pacino the advantage at the tippy top of the scale. Beyond that, Pacino and De Niro evenly split the top five (two apiece plus Godfather II) and top eight spots (three apiece plus Godfather II and Heat).

​Call me crazy, but I have to image that Heat's standing as the 8th-highest rated Pacino or De Niro film will surprise some folks. It tops Raging Bull, for which De Niro won Best Actor, Scent of Woman, for which Pacino won Best Actor, and several other more "critically acclaimed" films. I might not have expected it, and I might not entirely agree with it, but I like it because it reflects the will of the people – nearly half a million on IMDb and nearly a quarter million on Rotten Tomatoes for Heat alone.

And don't go getting mad at Heat just yet; it ranks even higher in next section's "Godfather Ratings," which combine box office results, the number and quality of online audience ratings, and actors' billing into a single metric. (Heat did really well at the box office and has a ton of high-quality reviews.)

Meanwhile, one highly regarded name that you didn't see in the box-office analysis and won't see in the "Godfather Ratings" is Once Upon a Time in America. The Sergio Leone crime drama is the 4th-highest rated Pacino or De Niro film on IMDb and the 5th-highest rated on Rotten Tomatoes. Now considered a masterpiece, the film was a huge box-office flop in the U.S. in 1984, grossing just $14.5 million domestically (2018 dollars), 94th all-time among Pacino and De Niro's films.

Other Pacino or De Niro films that have high online audience ratings but did very little at the box office include Brazil (De Niro) and The King of Comedy (De Niro), the latter of which was De Niro's fifth Martin Scorsese movie. A Bronx Tale (De Niro) and The Insider (Pacino) have high online ratings and did only modestly at the box office. Their "Godfather Ratings" all suffer some as a result.
Audience ratings tell their own unique story

At the same time, De Niro flopped around in a bunch of unknowns, often in lesser roles, before finally making a ratings dent in Mean Streets (7.4, 85%), which did little at the box office, and playing a legendary role in Godfather II (9.0, 97%).

​The audience ratings also capture De Niro and Pacino's 21st-century declines. Between Jackie Brown (1997) and Silver Linings Playbook (2012), De Niro's only title with a Rotten Tomatoes audience score over 81% was Stardust (7.7, 86%), in which he played the complementary role of Captain Shakespeare. (De Niro came close with Men of Honor and Meet The Parents in 2000.) Still, De Niro had the second-biggest box-office decade of his career in the 2000s – justice for the late 1970s and 1980s, when he had a ton of top-rated movies but yielded relatively little at the ticket counter.

Pacino's only hit since 2003 was his award-winning portrayal of Jack Kevorkian for HBO's You Don't Know Jack (2010). And so the stage is set for next month's Paterno, also on HBO, and next year's The Irishman, which reunites Pacino and De Niro for the fourth time.

Next: "The Godfather Ratings" combine box office results, audience ratings, and billing into a single metric

[2] ​The best IMDb rating for both actors belongs to The Godfather Saga, in which director Francis Ford Coppola and editor Barry Malkin re-edited The Godfather and The Godfather: Part II together in chronological order and added in almost 75 minutes of deleted scenes. The "mini-series" originally aired on NBC over four consecutive nights in November of 1977. Its IMDb review volume is really low, and it isn't even listed on Rotten Tomatoes, so I've excluded it from the rankings.

​[3] Ellis technically has the best Rotten Tomatoes audience score (100%). The documentary short is a 14-minute look at "the journey of an immigrant at Ellis Island [as] told through an art installation by French photographer JR," who was profiled by Anderson Cooper on 60 Minutes last week (Sunday, February 25). But that score has come on only 12 reviews, and if Ellis's IMDb rating is any indication, it will likely come down as more people review the piece. So I've also excluded it.

[4] Excluding The Godfather Saga, which is listed for both actors as a separate IMDb credit but was merely a re-edit of the first two Godfather films.

[5] And Dear America: Letters Home from Vietnam (7.9, 93%), a TV documentary in which De Niro had a smaller voice part.
The primary data sources for this story are Box Office Mojo (February 6), IMDb (January 26), and Rotten Tomatoes (February 2). Data was compiled and analyzed by ELDORADO. All charts and graphics herein were created by ELDORADO.