One metric we can use to compare the careers of Al Pacino and Robert De Niro is box office receipts. I used data from Box Office Mojo to analyze each actor’s domestic (U.S.) box office performance. The figures account for ticket price inflation and are expressed in 2018 dollars. In aggregate, De Niro has grossed $5.7 billion at the domestic box office on 83 films – about 50% more than Pacino’s $3.7 billion on 40 films.[1]

De Niro has appeared in more movies, especially in recent years, and he’s increasingly played supporting roles in blockbusters like Meet the Parents (2000), Shark Tale (2004), Meet the Fockers (2004), Little Fockers (2010), Silver Lining’s Playbook (2012), and American Hustle (2013). Those films are a testament to his versatility and longevity. But they also underscore the need to account for the actors’ “billing” in each film (i.e., were they the lead, the #2, the #3, etc.).

De Niro should be rewarded for staying relevant through supporting roles, but we shouldn’t interpret box office results through complementary roles (e.g., Pacino as Big Boy Caprice in Dick Tracy, De Niro as Pat Sr. in Silver Lining’s Playbook) the same way we do box office results that came by way of leading roles. By showing receipts in context of the actors’ billing in each film, we add a necessary layer of nuance to our look at the evolution of Pacino and De Niro’s careers: 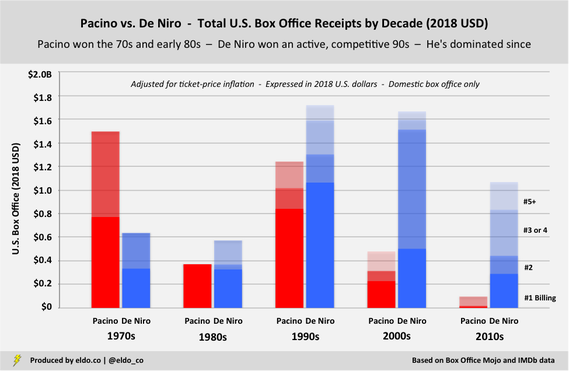 De Niro, meanwhile, was the number two in The Godfather: Part II ($233M) and the lead in Taxi Driver ($120M), The Deer Hunter ($192M), and Raging Bull ($80M). He also starred in Mean Streets ($16M) – De Niro’s first collaboration with director Martin Scorsese – but the film barely made a dent at the box office and ranks only 90th in U.S. box office receipts among all of Pacino and De Niro’s films.[2] Raging Bull wasn't a huge box-office hit either, slotting in at 45th on the actors' combined all-time list.

In the end, Pacino had more top-tier box-office production in the 1970s and early 1980s, headlined by an unrivaled $724 million in The Godfather, the 25th-highest grossing film of all time (domestic receipts in 2018 dollars). You can see how much of an outlier it is on this chart: 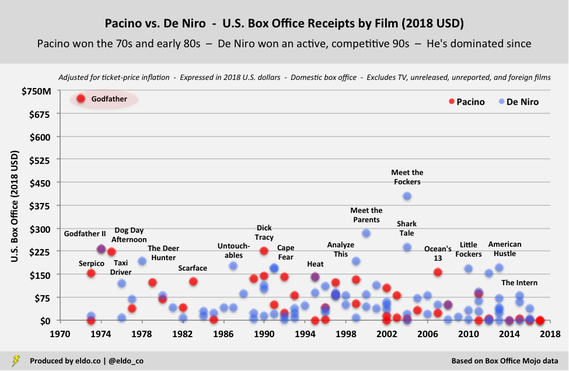 The 1980s were relatively quiet at the box office for Pacino and De Niro. Pacino was in only five films, including the aforementioned Scarface ($126M) and less-famous-but-more-commercially-successful Sea of Love ($135M). De Niro did 13 films and had a spectacular run in terms of audience ratings – he won the 1981 Academy Award for Best Actor for Raging Bull and owns 1976-1990 on the ratings side – but that didn't translate into box-office success. The Untouchables ($179M) was his only film to break $100 million; Raging Bull ($80M) and Midnight Run ($86M) were the only others to top $50 million. 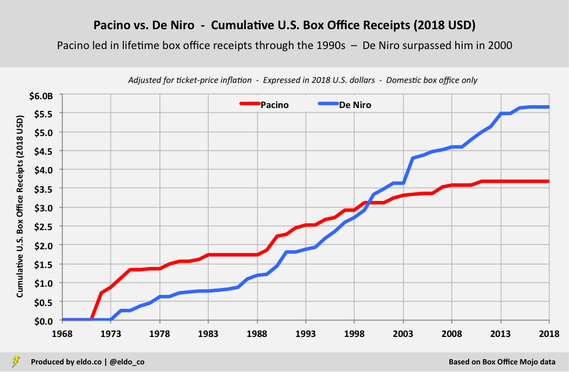 But De Niro has dominated since then, transitioning into big-ticket supporting roles and diversifying his genres. In many respects, we've been re-introduced to De Niro as a sort of fun-loving uncle. The majority of his box office success in the 2000s came as a number two in comedic roles, and most of his receipts this decade have come in even more of a supporting capacity. That adaptability has given De Niro new life on the silver screen, and it’s settled the “Pacino vs. De Niro” career box-office debate.
A Quick Word on Film Volume and Average Box Office Results

In the next chart, you can see these box-office averages on a decade-by-decade basis. Pacino boasted better “per film” results in the 1970s, 1980s, and 1990s. But De Niro has long been more active, appearing in 2.3x more films than Pacino after they both became famous in the 1970s: 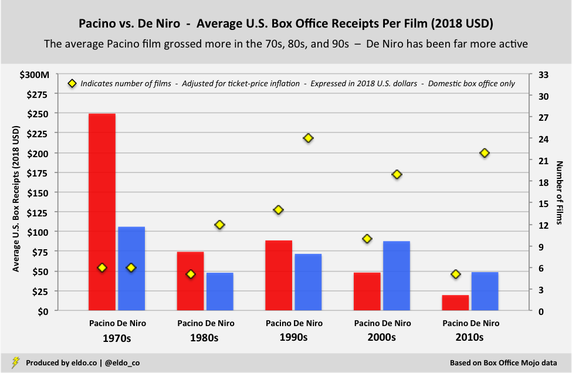 The following table shows Pacino and De Niro’s top 20 grossing films at the domestic box office (in 2018 dollars). Interestingly, the actors played the lead role in only five of their top 15 films – Pacino in The Godfather: Part II and Dog Day Afternoon and De Niro in Analyze This, The Deer Hunter, and Cape Fear. The two men split the top seven – three apiece plus The Godfather: Part II, which they were both in, of course – but De Niro alone owns 10 of the top 15 spots on the list. 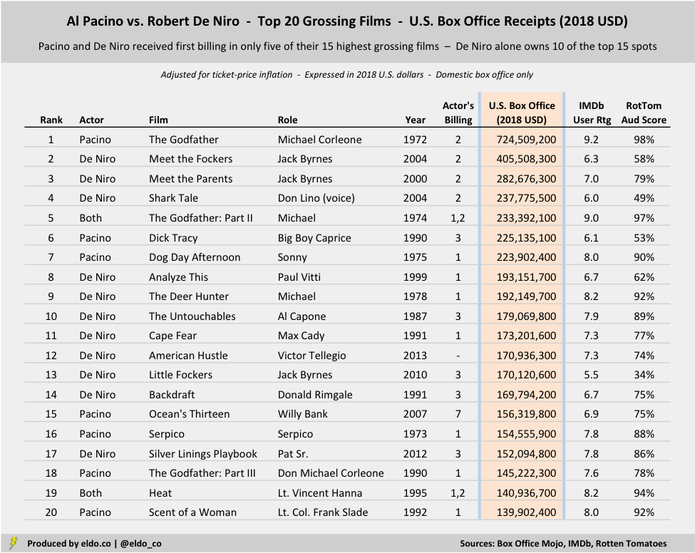 [2] The box office results for Mean Streets (1973) are not reported consistently. Box Office Mojo shows N/A and The-Numbers.com shows $32,645. For purposes of this analysis, I used a $3 million gross, sourced from Entertainment Weekly. That equates to $15.6 million in 2018 (adjusted for ticket-price inflation).

[4] As a result of the modifications detailed in Footnote #1, my box-office averages and totals for the two actors vary slightly from the figures that are directly reported on Box Office Mojo.
The primary data sources for this story are Box Office Mojo (February 6), IMDb (January 26), and Rotten Tomatoes (February 2). Data was compiled and analyzed by ELDORADO. All charts and graphics herein were created by ELDORADO.