A few days before tonight's Academy Awards ceremony, a group of men aged 74 to 79 gathered at the Biscuits and Barbeque restaurant in Mineola, Long Island. It was 61 degrees in late February, perfect weather for a few 70-somethings to stroll out from their houses and meet for lunch.

The men were born in East Harlem, Greenwich Village, Queens, Brooklyn, and Newark during (or just prior) to the outbreak of World War II. But they weren’t gathered at the restaurant to reminisce about New York or the days of old. Al Pacino, Robert De Niro, Martin Scorsese, Harvey Keitel, and Joe Pesci were there to film scenes for The Irishman, which comes out next year.

Directed by Scorsese and based on Charles Brandt’s book I Heard You Paint Houses, the film tells the story of Frank “The Irishman” Sheeran and Jimmy Hoffa, two labor union officials with ties to organized crime. Hoffa was head of the teamsters union – in the words of Robert Kennedy, he was “the most powerful man in the country, next to the President” – before vanishing in 1975.

The Irishman brings Pacino (Hoffa) and De Niro (Sheeran) together in the same movie for the fourth time, joining The Godfather: Part II (1974), Heat (1995), and Righteous Kill (2008). (They didn’t share any scenes in Godfather II.) For those who long for young Pacino and De Niro, the movie will use de-aging technology – rather than prosthetics or make-up – to make the actors look younger, at least in certain scenes. Word is we’ll see versions of De Niro in his 20s, 40s, and 60s.

Uniting Pacino and De Niro in a Scorsese passion project about one of America’s most famous unsolved mysteries has made The Irishman a highly anticipated affair. That we might experience younger versions of them on-screen adds even more fascinating allure. All together, the project gives us cause to reflect on the long and legendary careers of Al Pacino and Robert De Niro.
Pacino and De Niro booked their first official film credits in the late 1960s. Their performances in The Godfather (1972) and The Godfather: Part II (1974) a few years later quickly secured their places in American film lore. The ensuing decades advanced their legend, and their connections to The Godfather, shared Italian-American roots in New York, and simultaneous rise to stardom have kept them intertwined in American culture for almost five decades, even if they’ve rarely shared the screen.

That entanglement inevitably spawned a longstanding debate about who’s had the better career, played the better roles, and appeared in the best films. The argument has quieted some as the actors aged into the 21st century, but it used to run hot, and like any great pop culture dispute, it was borderline unsettleable. Versions of the Pacino-De Niro debate remain scattered throughout the internet.

Time will tell whether “Pacino versus De Niro” resurfaces with The Irishman, or as the actors continue to age. But in the spirit of Oscar season and amidst a potential Pacino-De Niro late-career renaissance – Pacino also stars in HBO’s Paterno next month – I thought I’d do my part to contribute. And rather than offer one more opinion in a sea of opinions, I put numbers to the half-century-old debate.

On the pages that follow, we’ll walk through the careers, films, and roles of Pacino and De Niro, looking at box office receipts, the actors’ “billing” in their films (i.e., were they the lead, the #2, the #3, etc.), and audience ratings on popular review sites IMDb and Rotten Tomatoes. Each area offers unique insights. To aggregate those insights, I developed something called “The Godfather Ratings,” which combine box office receipts, billing, and online reviews into a single metric.

The study covers quite a bit, so I tried to set up the parts so they can be Googled, found, and read (or skimmed) independently. Sections sometimes refer to one another, but you can otherwise feel free to skip and click around. The next section is an in-depth box-office comparison (with an eye toward the actors' billing in each film), followed by a review of the online audience ratings for Pacino and De Niro's films, the aforementioned "Godfather Ratings" (which includes a ranking of the actors' best films and roles), and finally a brief genre comparison.

Before we kick off this ELDORADO SHOWDOWN, here is the Tale of the Tape (and other summary information): 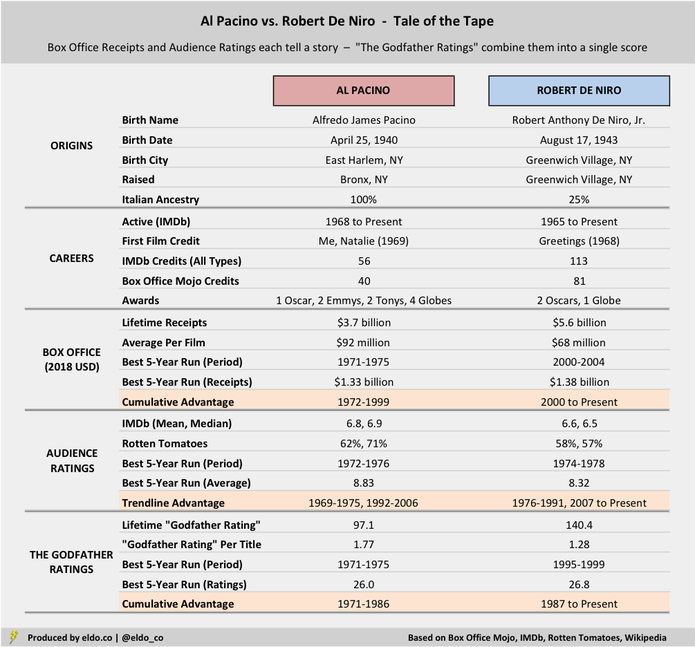 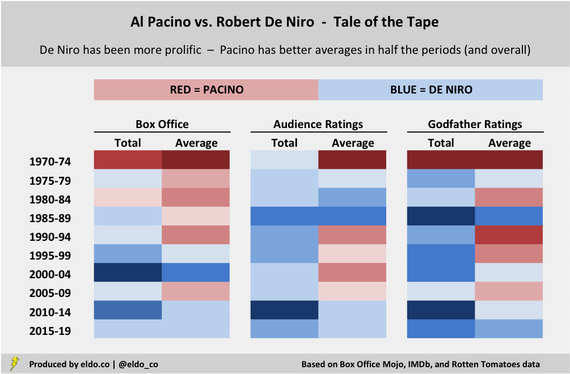 Total audience ratings is something of a proxy for film volume
Next: An in-depth comparison of Pacino and De Niro's box office receipts