This showdown has included some pretty deep dives, so let's keep this section a little shorter. The charts below show the genre evolution of Al Pacino and Robert De Niro's work over time. They capture all of the titles listed for Pacino and De Niro on IMDb, so it's mostly big-screen films, with some TV movies, mini-series, shorts, and unreleased work mixed in. Pacino has 56 credits on IMDb; De Niro has 113.[1]

I specifically used the genres that IMDb lists for each title. The site appears to tag a maximum of three genres per title, and Pacino and De Niro have an average of 2.3 genres per title, so some titles do "contribute" to the chart slightly more than others. I could mess around with weighting the titles equally (or even weighting them according to box office receipts), but for now these are just straightforward tallies.

According to IMDb, Pacino has worked in 16 different genres and De Niro has worked in 21. To simplify our look, I clustered some of the key genres together in the charts below. As you compare those color-coded clusters. the main takeaways probably come as no surprise.

Both actors began their careers with a heavy concentration of drama, crime, thriller, or mystery films. In the 1970s, 85% of Pacino's genre listings and 69% of De Niro's came from these categories. Both diversified a little bit in the 1980s (on lighter film volume), and then kinda stepped back in the 1990s to what originally made them famous. Since then, De Niro has really mixed things up, with the majority of his 21st-century work coming by way of comedy, romance, family, adventure, and other genres (55% in the 2000s and 51% in the 2010s).[2]

Pacino has also diversified, albeit not nearly to the degree that De Niro has (and with far less volume to boot). Twenty-nine percent of Pacino's work in the 2000s and 22% of his work in the 2010s came through comedy, romance, family, adventure and other genres. He's also had a noteworthy concentration of biographical work this decade, including You Don't Know Jack (Jack Kevorkian), Phil Spector (Phil Spector), Paterno (Joe Paterno) – all for HBO – and next year's The Irishman, in which Pacino stars as Jimmy Hoffa (alongside De Niro).

In short, Pacino has always leaned more heavily on "serious" films, and while both actors have diversified their genres over time, De Niro has diversified more. That adaptability has extended De Niro's popularity on the silver screen, and as we saw in previous sections, it enabled him to surpass Pacino in lifetime box office receipts. To some, it also won Robert De Niro the age-old Pacino vs. De Niro debate. 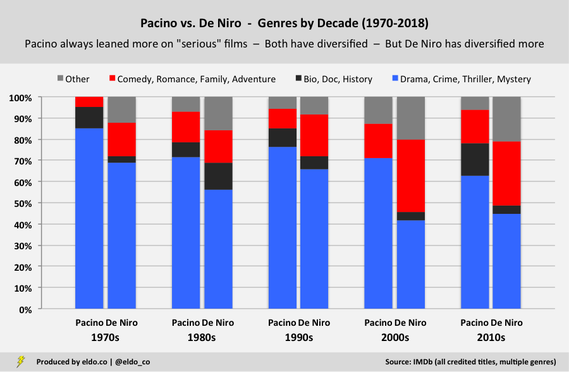 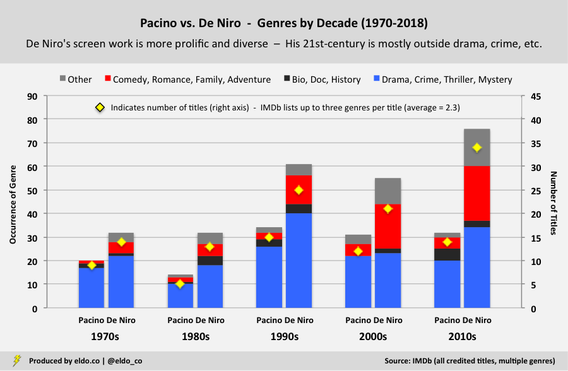 Number of titles reflects all work credited on IMDb

[1] These charts include Looking for Richard (1996) as a 57th credit for Pacino. It's not listed on his IMDb summary, it's included as part of his box office receipts on Box Office Mojo and was therefore part of the data set in the box-office section of this analysis. It remains part of the data set here.

[2] "Other" genres for Pacino and De Niro include Action, Animation, Fantasy, Horror, Music, Musical, Sci-Fi, Short, Sports, and War.
The primary data sources for this story are Box Office Mojo (February 6), IMDb (January 26), and Rotten Tomatoes (February 2). Data was compiled and analyzed by ELDORADO. All charts and graphics herein were created by ELDORADO.