Over the past two years, I've written extensively about college basketball's "dome effect." That work has included a five-part study (2016) and short update (2017) on ELDORADO, an article for FiveThirtyEight (2016), and a points-focused spinoff for Nylon Calculus (2017). The common thread, of course, is that the "dome effect" is a myth.

The 2016 pieces serendipitously coincided with Villanova and North Carolina shooting a combined 19-for-31 (61%) on threes in the national championship game – in "big, bad" NRG Stadium, no less, then considered the poster child for the dome effect. Villanova went 19-for-32 (59%) from three at that year's Final Four. Between the published data and the fresh anecdotes, I thought the illusion of poor three-point shooting in newfangled domes was finally coming to an end.

​But one year later, North Carolina made only 4-of-27 (15%) three-point shot attempts in the national title game (and still won), and people once again took issue with the unconventional venue and court layout, this time University of Phoenix Stadium. Never mind that North Carolina's opponent, Gonzaga, shot a combined 17-for-38 (45%) from three in its two Final Four games.

So in the spirit of continuing this series and providing you with the most up-to-date numbers, I am back with another reminder that the dome effect isn't real.
Quick history

The 1996 Final Four at Continental Airlines Arena in New Jersey was the last one held in a normal basketball arena. National championship game attendance that year was a little over 19,000. (Tony Delk and Kentucky beat John Wallace and Syracuse.)

From 1997 through 2008[1], Final Fours were played in bigger domed stadiums – all but one in football stadiums – with the basketball court laid in one corner or end zone. This “traditional dome” setup allowed for Final Four crowds of 40- and 50-thousand plus.

Starting with two regionals in 2008[2] and the Final Four in 2009, the NCAA moved the court from the end zone to midfield, enabling 70- to 80-thousand fans to attend the tournament’s biggest games. But it also created rampant speculation that distant and unfamiliar backdrops behind each hoop were negatively impacting shooting, particularly three-point shooting. The phenomenon was dubbed the "dome effect," and it resurfaces every time a team struggles from outside in the venue type (see North Carolina, 2017).
The "dome effect" is a myth

Most dome-effect conversation relied on anecdote or evidence from only a couple of NCAA tournaments. So I reviewed every Sweet 16, Elite Eight, Final Four, and national championship game since 2006 – a total of 360 team performances in 180 games.[3] Contrary to popular belief, teams shoot threes better in domes with the court at midfield than they do anywhere else: 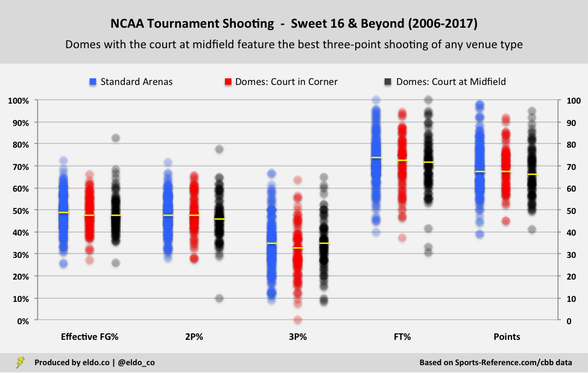 3P% standard deviation is also lowest in domes-midfield
​​​But wait – the court-at-midfield setup is used in later rounds, with better teams, so couldn't those teams simply be better at three-point shooting to begin with? To account for that, I measured team performance in each venue type relative to their season averages. This helps isolate the possible *effects* of venue type on shooting. Still, our observations hold – domed stadiums with the court at midfield are no villain when it comes to threes: 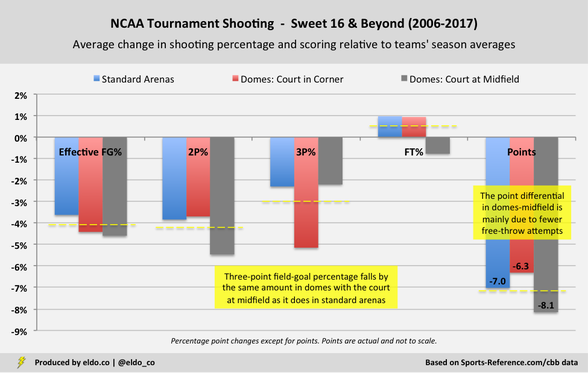 ​​​Notice everything but free throws falls relative to the regular season? That makes sense – teams in late-round tournament games are up against top competition. From what I can gather, early dome-effect speculation largely ignored these across-the-board declines and reacted instead to court-at-midfield three-point shooting in isolation, which at 34.6% looks terrible. (It's the team equivalent of 194th-best in D-I.)

But in the later rounds of the NCAA tournament, shooting percentages decline across all venue types. And on average, three-point shooting percentage falls by almost exactly the same amount in football stadiums with the court atop the 50-yard line as it does in regular old basketball arenas. (The setup most deserving of three-point suspicion is the traditional dome with the court in one corner or end zone.)

Here's another way to slice it. In the last four rounds of the NCAA tournament, teams struggle from long range LEAST OFTEN in domes with the court at the 50-yard-line – exactly the opposite of conventional wisdom:

​A look at individual venues only furthers the notion that the dome effect is a myth. Six of the seven venues that have used the court-at-midfield setup have had less of an "effect" on threes than the average regional or Final Four venue since 2006. (This year’s Final Four venue, San Antonio's Alamodome, has never used the court-at-midfield setup in the NCAA tournament; it’s had an average "effect" on threes as a traditional dome.) 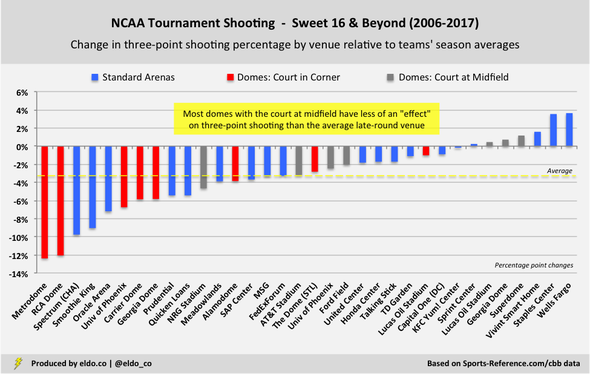 Current names of venues  |  See eFG% thru 2016
​Statistical testing confirms that venue type does not have a meaningful effect on shooting or scoring in the later rounds of the NCAA tournament. What does? Not surprisingly, team offense and opponent defense – as measured by full-season performance – are the statistically significant variables at play. You can even map teams' offensive performance in late-round tournament games to the full-season quality of the defenses they're up against[4]:

Tournament points exclude overtime
​Teams in arenas shoot best overall – they've faced the softest defenses. Teams in domes-midfield stink from two – they've played the best interior defenses. Teams in domes-corner stink from three – they've seen the best perimeter defenses. And as I deconstructed for Nylon Calculus, lower scoring in domes-midfield can be traced (rather unsexily) to fewer free-throw attempts (and overtime, if you don't strip it out). Not to some mysterious dome effect.

It's dangerously easy to whip a few bad shooting performances into a narrative about domes – especially given the oddity of a 4,700-square-foot basketball court laying across the 50-yard-line of a 57,600-square-foot football field. But when a team struggles from outside at this year's Final Four – and one or two teams will – resist the temptation to blame the dome, and instead do what we'd do if the game were anywhere else ​– blame the defense or a blame a bad night.

Methodology
This analysis uses Effective FG% and aggregate performance, adding up all shots taken and made and calculating shooting percentages (shots equally weighted). This is the same methodology I've used in every story in this series, except for my original five-party study. That used True Shooting % and average performance, weighting each game equally regardless of how many shots were taken. The takeaways are the same with either methodology.
Footnotes
[1] The traditional-dome setup was also used at a handful of Final Four venues prior to 1997.

[2] The modern version of the dome-with-the-court-at-the-50-yard-line made its first NCAA tournament appearance at the 2008 Midwest Regional in Detroit (Ford Field) and 2008 South Regional in Houston (Reliant Stadium, now NRG Stadium). The setup was previously used in some regular-season games and a variation without seats around the court was used for UCLA-Houston at the Astrodome in 1968 (the "Game of the Century"), which was also a regular-season game. The 1971 Final Four at the Astrodome offered a somewhat similar court-in-the-middle-of-a-baseball-diamond configuration.
​
[3] Eighty-seven games (174 team performances) in standard arenas, 48 games (96 team performances) in traditional domes with the court in one corner or end zone, and 45 games (90 team performances) in domes with the court at midfield. The traditional dome with the court in one corner or end zone was last used in the NCAA tournament in the 2015 East Regionals, held at the Carrier Dome in Syracuse. The 2016, 2017, and 2018 NCAA tournaments have all used standard arenas through the Elite Eight, followed by domes with the court at midfield in the Final Four.
​
[5] These relationships are statistically significant but do not offer much in the way of predictive power. Two-point defense data is only available since 2009 and three-point defense data is only available since 2010, which creates a little bit of a mismatch in time periods relative to the offensive performances in the NCAA tournament to which they're compared in the chart above. Because three-point defense data is only available since 2010, there is not enough information to calculate an aggregate effective field-goal percentage allowed for the entire period. The effective field-goal percentage defense presented above is thus calculated based on the average number of field goals taken and made over the course of the full season against the defenses playing in each venue since 2006 and the average number of three-pointers made against them since 2010.
﻿﻿The data source for this article is sports-reference.com/cbb. Data was compiled and analyzed by ELDORADO. All charts and graphics herein were created by ELDORADO.