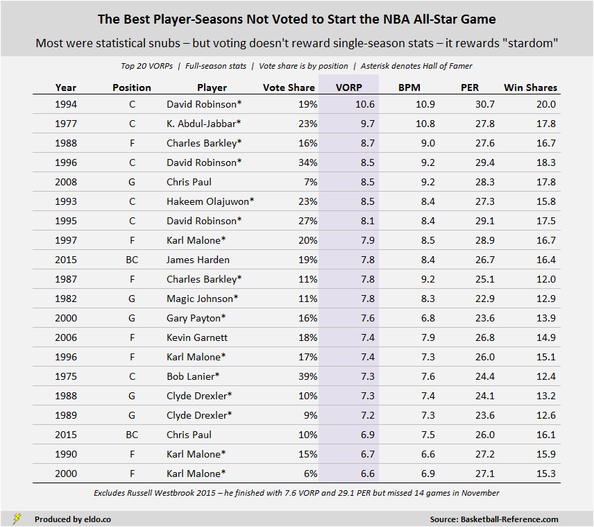 In 2017 Russell Westbrook topped David Robinson for the number one spot on this list
David Robinson’s 1994 is the fifth best VORP and tenth best PER season since 1975, yet he placed behind Hakeem Olajuwon and Chris Webber in voting that year. Olajuwon snubbed him in '90, '95, '96, and '97 as well. In fact, the only season in which Olajuwon outperformed Robinson in PER and VORP was 1993 – ironically the last time The Admiral started over Hakeem in an All-Star Game.

Kareem’s 1977 – fourteenth best in VORP since 1975 – was snubbed by Dan Issel; Barkley’s ’88 by Dominique Wilkins; Malone’s ’96 and ’97 by Barkley and Kemp (both players both times); Harden’s ’15 by Kobe. Chris Paul was arguably the second best player in the entire NBA in 2008 behind LeBron, and yet he finished fifth in voting among western conference guards behind Bryant, Iverson, McGrady, and Nash.
​And what about those who are completely ignored by fans, due perhaps to their market, style of play, or lack of flair? 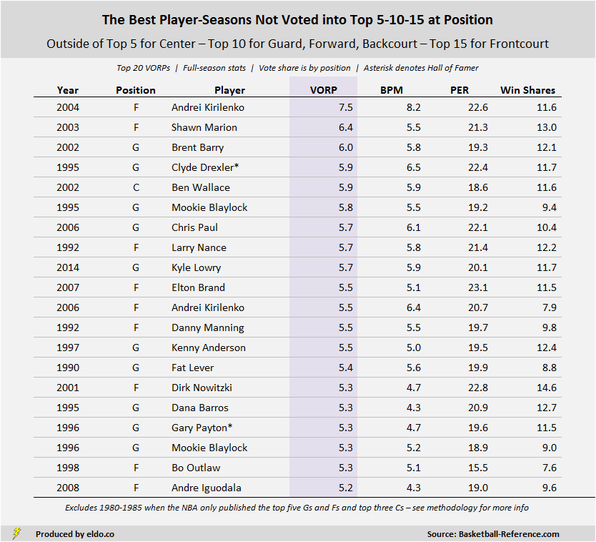 Andrei Kirilenko’s 2004 was a top sixty VORP season in the last forty years – and he was ultimately named an All-Star reserve – yet he didn’t even crack the top ten in votes among western conference forwards. Shawn Marion was also later named an All-Star reserve in 2003. Ben Wallace led the league in blocks and rebounds per game in 2002 but was ignored by voters, though he started the next two All-Star Games and appeared in the next four.