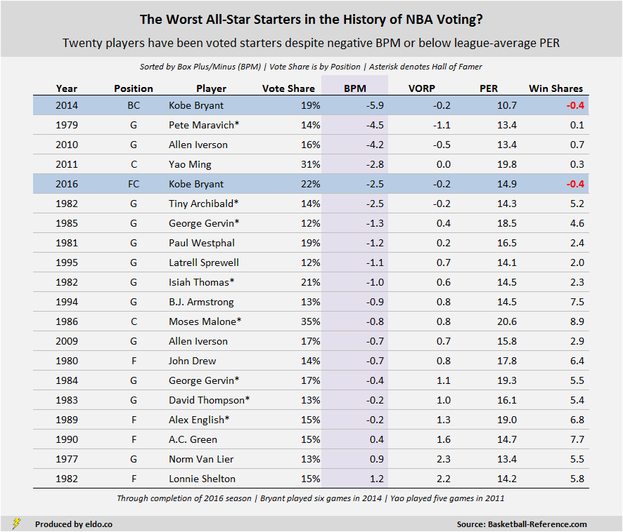 The question mark in the table above is no accident. Expressing NBA player performance by way of a single metric is riddled with complexity, and stardom and All-Star deservedness entail far more than statistics, let alone those from a single season.

​In the words of Michael Rapaport, “What’s this new term, offensive efficiency? Where the fuck do they come up with this bullshit? What is this? Every year they come with a new stat […] What does that mean – no one knows what that – do you even know what that means? […] I’m watching basketball here eating chips.”

If you look back across the table, you’ll see that Rapaport has a point. In some cases, poor performance by one metric does not mean poor performance across them all. In 1982, Moses Malone was top fifteen in the NBA in PER and top twenty in Win Shares, yet his BPM that season was below average and is one of the twenty worst for a player voted to start an All-Star Game.

​But whereas Moses’s 1982 is a mixed statistical bag, Kobe’s 2014 and 2016 are the worst or among the worst across all metrics. Among players voted to start, his 2014 is worst in PER and BPM and third worst in VORP. His 2016 was ultimately eleventh worst in PER, fifth worst in BPM, and third worst in VORP. ​Kobe 2014 and Kobe 2016 are the only two players in history voted to start the All-Star Game during a season in which they posted negative win shares.

Next: NBA All-Star Voting & Value Over Replacement Player (VORP)
Note: PER and BPM are rate statistics, so while Kobe's 2014 results in these categories are based on only six games - and Yao Ming's in 2011 are based on only five games - they are not cumulative statistics that would otherwise have been built over the course of a season. VORP, on the other hand, accumulates with minutes played over the course of a season. Note, however, that if Kobe continued to play in 2014 at a -5.9 BPM rate, he would have accumulated negative VORP, rendering his VORP total even worse than is represented above. Check out this glossary for more information on the terms and their respective pros and cons.
Vote share methodology and implications