ELDORADO
NFL Kickers: Playoff Heroes or Goats, More So Now Than Ever Before
JAN 8 2016
Tweet Follow @eldo_co
I. Kickers have never been this good at field goals and this bad at extra points at the same time

​Our recent exploration of 2015’s historically weird NFL scores took us deep into the world of NFL kickers. There, we saw how field goals (FGs) evolved from infrequent and inaccurate into a significant and reliable scoring phenomenon that now accounts for over 20% of all NFL points. We also saw how extra points (XPs) went from an imperfect art in the league’s early decades to nearly automatic in the 1960s-1970s and 1990s-2000s, each time resulting in a league-imposed change to the XP distance. 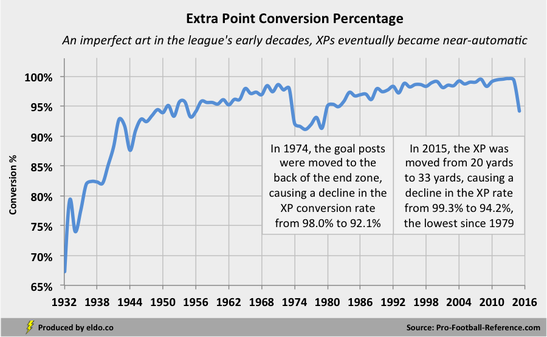 The 2015 regular season featured the fifth most FGs per game in NFL history (1.63 per team per game), the third highest FG accuracy of all time (84.5%), the lowest XP conversion rate since 1979 (94.2%), and the most two-point conversion attempts since 1998 (0.18 per team per game). As became our refrain, this perfect storm of variables -- having never before occurred at these levels at the same time -- produced the weirdest scores in NFL history. Now, at the start of the NFL playoffs, we wonder whether it might also produce some of the weirdest, most heroic, or most devastating outcomes in NFL playoff history. 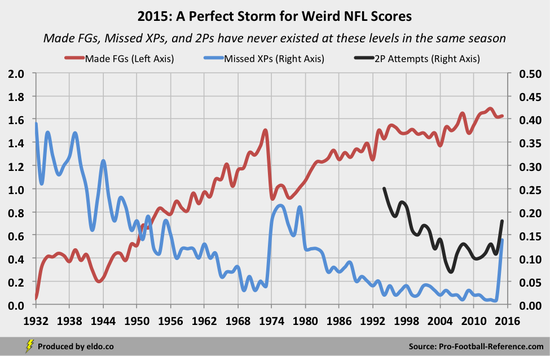 We need not recount the league’s most famous playoff makes and infamous playoff misses, whether long FGs or (gulp) XPs. You know them well. Just know this: NFL kickers are about as successful as they’ve ever been with long-distance FGs, increasing their chances for heroics (and, we suppose, the related possibility that a kicker is asked to make too long a FG, or too many long FGs, inviting potential disappointment). On the other hand, kickers are as statistically vulnerable to the devastation of a missed XP as they’ve been since 1979, and are probably more emotionally vulnerable to such devastation than ever before, given that modern fan bases are still largely accustomed to near-automatic XPs (despite the 2015 regular season), and there are far more people watching (and tweeting) now than in league history. ​​​​ 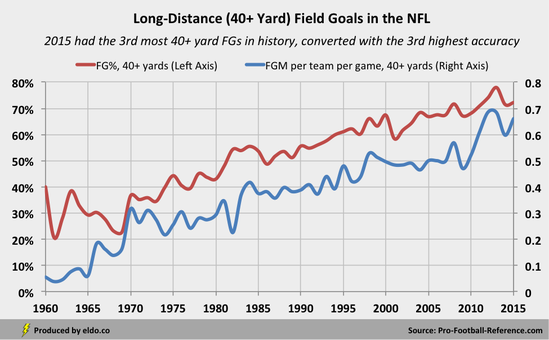 ​Simply put, kickers have never been this good at FGs and this bad at XPs at the same time, and we’ve never seen this combination play out with stakes this high (elimination) or in this context (XP expectations, viewership, social media). As a result, the chances for a kicker to become a hero or goat – already elevated in the playoffs – are higher than ever before.
II. There's a hero (and goat) on that field, we just don't know who it is yet 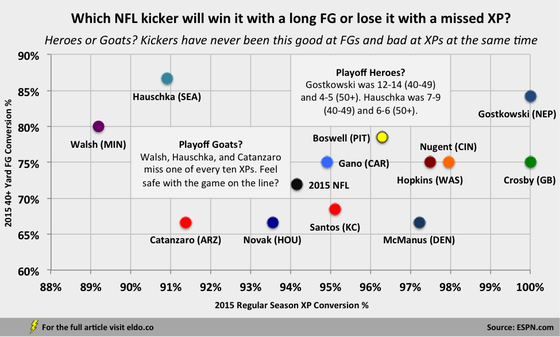 ​Walsh (89.2%), Hauschka (90.9%), and Catanzaro (91.4%) are well below league average for XPs (94.2%). If regular season trends continue, they will each miss one in ten XPs, or about one every three to four games, should their teams advance far enough to allow for it. Interestingly, Walsh and Hauschka performed poorly in 2015 on XPs but kicked very well from distance, at both 40-49 yards and 50+. So while they run the risk a big XP miss, they are also prime candidates for long-range heroism. [In their Wild Card game, Hauschka converted the game-winner from 46 and Walsh missed from 27, a little shorter than an XP.] McManus is their opposite -- very good on XPs but unsteady from long-range.

Past performance does not guarantee future results, but if these kickers perform as they did in the regular season, we can thus expect around three missed XPs over ten playoff games and the Super Bowl. We don’t know for sure if it will happen (maybe they’ll be more locked in in the playoffs, or maybe only the studs will advance) and we certainly don’t know if it will ultimately impact a game’s outcome. But because of their constant evolution and the league’s response to it, NFL kickers are set to become playoff heroes or goats like never before.
For a deeper statistical look at the evolution of NFL kickers, check out FiveThirtyEight's Kickers Are Forever (Jan 28 2015) and The Haters Are Losing Their War On Kickers (Jan 13 2016)

​The data sources for this article are pro-football-reference.com and espn.com. Data was compiled and analyzed by ELDORADO. All charts and graphics herein were created by ELDORADO.