As much as we all love to compare performances throughout NFL history, players put up their numbers in different eras. Most fundamentally, offensive balance in the NFL shifted from the run to the pass over time, with some noteworthy peaks and valleys along the way. 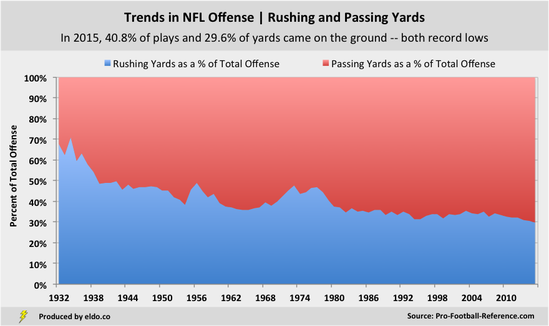 Passing yards are not shown net of yards lost to sacks as they were not tracked for all of NFL history​
In 2015, passing accounted for a record-high 70.4% of total yards and rushing accounted for a record-low 29.6%, the opposite of the NFL’s early years. Offenses in 1932 were anemic, averaging 163 total yards and eight points per game, but they still rushed for more yards per game than teams in 2015. 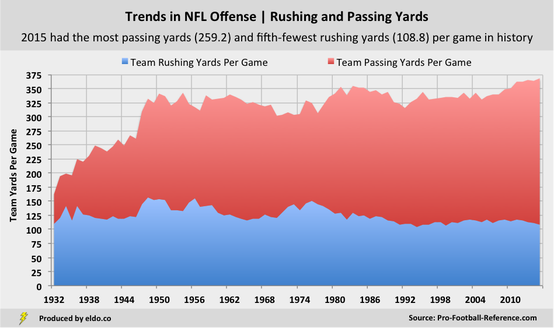 Passing yards are not shown net of yards lost to sacks as they were not tracked for all of NFL history​
While rushing’s general downward trend is clear, the running game experienced a heyday of sorts in the 1970s – precisely when O.J. Simpson was playing. It can be tempting, then, to take the performance of backs like Simpson and Walter Payton with a grain of salt. After all, weren’t they playing in an era when teams ran 35 times for 140 yards per game? And isn’t Adrian Peterson playing in an era of 27 carries and 115 yards per team per game? 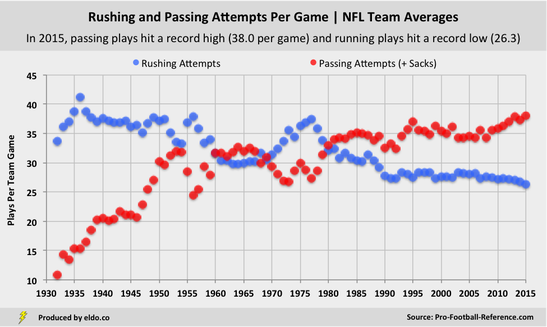 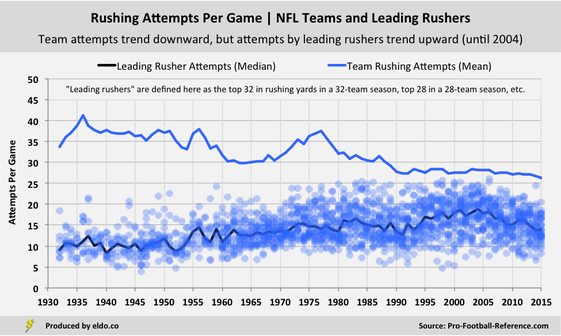 Teams rushed a ton in the NFL’s early decades, but those carries were very spread out. Teams ran far more in the 1970s than the 2000s, but the typical lead back in the 2000s actually carried the ball more than his 1970s counterpart. And while top backs today receive fewer carries than they did a decade ago, they’re still handed the ball about as much as they were in the 1970s and 1980s.

​Meanwhile, lead backs in the late 1990s and early 2000s - who carried the ball more than anyone in history - would unfairly benefit simply because they played in an era of low league-wide attempts.​

​But even then, adjustments are tricky. The very best backs see really high carry volume across most eras, regardless of what the the rest of the league or other top-level backs were doing. 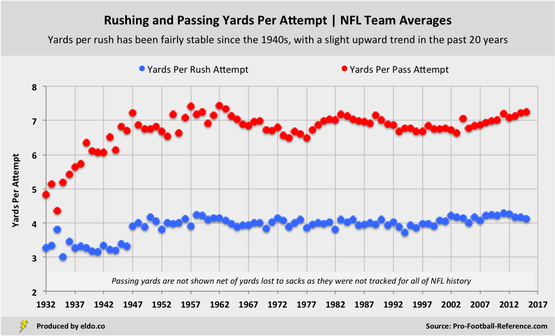 Yards per passing play has risen since the mid-1970s, while yards per rush has trended slightly upward since the mid-1990s. Even so, yards per carry has been fairly stable since 1947, with an average of 4.03 yards and a standard deviation of 0.12 yards[1]. ​The narrowing of the hash marks from 40 to 18.5 feet apart in 1972 does not appear to have affected yards per carry, even if it did have other effects on the game[2]. 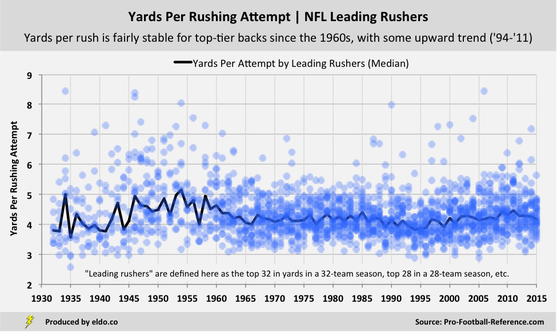 Adjusted yards per carry makes for its own interesting analysis, and we may well revisit this study to see how it shakes things up, but we're going to shy away from applying it directly this time around[5]. In any case - and with everything discussed in this section in mind - our approach in the next section will itself indirectly account for yards per carry and attempts per game trends among lead backs.

Appendix II: The Best Running Backs and Rushing Seasons in NFL History
Footnotes
[1] 1947 through 2015, seasons equally weighted. Note that while league-wide yards-per-carry averages are fairly stable, Chase Stuart at Football Perspective has written extensively about how yards per carry for individual rushers can vary wildly from year-to-year, and even within a single season. Case in point, this study's protagonist (O.J. Simpson) averaged 4.3, 6.0, 4.2, and 5.5 yards per carry from 1972 through 1975
[2] We’ll have to take a closer look at the hash mark moves in 1935 and 1945, though there does not seem to have been immediate impact on yards per carry (at least not until 1947 in the latter case)
[3] If we revisit this analysis, we'll remove the quarterbacks and show only the top-tier running backs in a given season
​[4] And naturally, with a difference of 0.4 yards per rush, 15 carries per game equates to 96 yards per season. But extremes are, by definition, rare - if you look at five-year rolling averages, the biggest yards-per-carry delta you'll find is 0.37 yards (2012 peak to 1997 trough)
​​[5] Yards per carry is a fickle phenomenon, influenced by play calls, long runs, offensive lines, defensive schemes, and more. For further reading, check out Chase Stuart at Football Perspective (Career Leaders in Era-Adjusted Yards Per Carry), Brian Malone of DynastyLeagueFootball.com (Putting Lipstick on the YPC Pig), Mike Clay at Pro Football Focus (Adjusting Yards Per Carry Based on Defensive Personnel Packages), Bob Ford of GOATBacks.com (YPC Leaders Since 1970), and Danny Tuccitto at International Rounding (When Do Yards and Touchdowns Per Carry Stabilize?)
The data source for this article is pro-football-reference.com. Data was compiled and analyzed by ELDORADO. All charts and graphics herein were created by ELDORADO. Historical data includes the American Football League (1960-1969) and All America Football Conference (1946-1949). Regular season statistics only.