We've also been exploring which variables best explain the frequency of weird scores. The answer there is three-fold: made field goals (FGs) per game, missed extra points (XPs) per game, and two-point (2P) conversion attempts per game. We've seen that these three variables together explain 80% to 85% of the variance in non-traditional score frequency. And we've seen that 2015 is a perfect storm of these three variables, with the fifth most made FGs per game in NFL history, the most missed XPs per game since 1979 (a result of the new XP distance), and the most 2P conversion attempts per game since 1998. 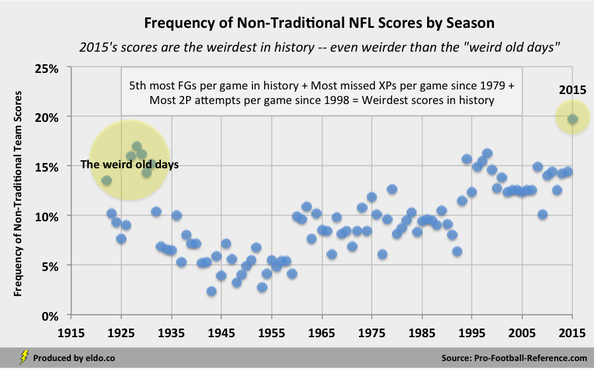 That's all well and good, but how exactly has this played out in real NFL games in 2015? Which of these variables is truly to blame for this season's strange scores? Where would we stand had the NFL not moved the XP back 13 yards? To answer these questions and bring this whole “non-traditional football score” thing to life, we analyzed the cause of every weird NFL team score this season. Once again, let's explore. 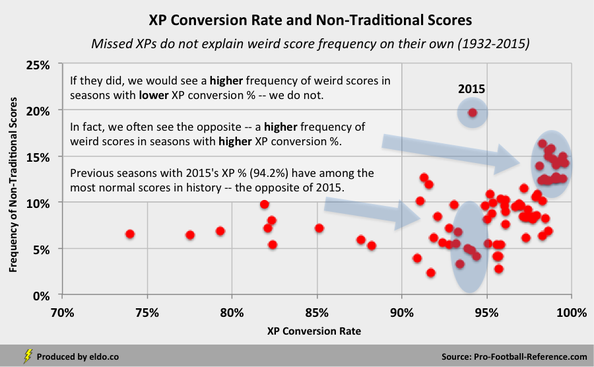 II. 85% of 2015’s Weird Scores Are Caused by FGs, Missed XPs, and 2P Conversions [and they're about equally responsible]

There are five ways for scores to become weird: made FGs (4FGs, 5FGs, or 6FGs[3] by one team), missed XPs, 2P conversions, safeties, and overtime TDs. A single occurrence of any one of these in an otherwise “normal” game (featuring only TDs, XPs, and FGs) can produce a weird score.

Two quick notes. First, these five variables do not automatically produce weird scores. Even in a “normal” game with straightforward TD-XP-FG scoring, the determining factor in one of these variables actually causing a weird score is the number of team FGs in the game, which we explain in detail in part four. Second, real games aren’t always so “normal”. Many games include more than one of these variables, or more than one instance of a single variable. Sometimes they combine to create weird scores, and other times they offset back to normal scores, as in the case of a missed XP and a made 2P conversion. 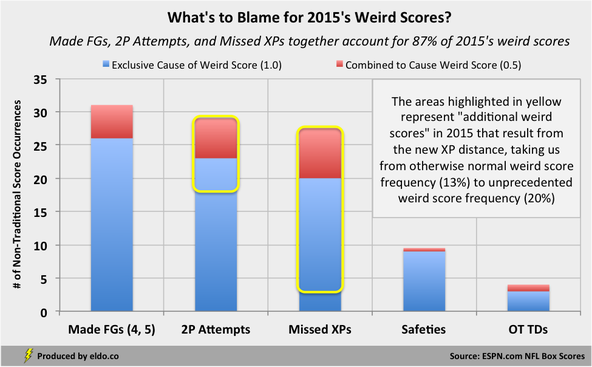 4FG and 5FG games, missed XPs, and 2P conversions are about equally responsible for this season’s non-traditional scores. Together, they’ve caused 87.5 of 101 weird scores, or 86.6% of the total. This aligns with the combined historical explanatory power of the three variables that we uncovered last time. The rest of the weird scores are due to safeties and overtime TDs[4].
​ III. But Really, Which of Those Three Variables Is to Blame for 2015’s Weird Scores? [if we have to blame something]

Before we go there, it’s important to highlight one more time that made FGs, missed XPs, and 2P conversions are together responsible for 2015’s weird scores. 2015 is the weirdest season in NFL history because for the first time ever, these three variables are near all-time highs (FGs, 2Ps) or at recent highs (missed XPs) in the same season. This is the “perfect storm” we keep talking about. Having all three at these levels at the same time is what makes 2015 so special and strange. Eliminate any one of them and 2015’s scores wouldn’t be worth writing about. 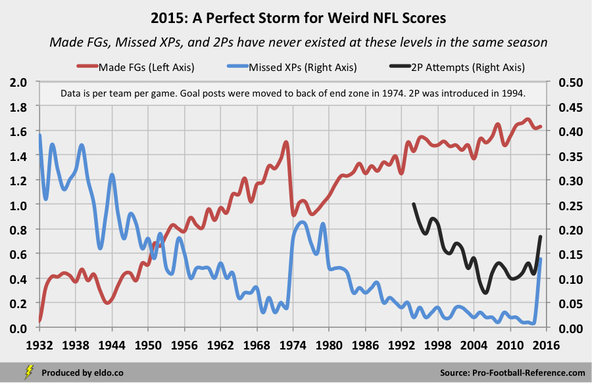 If we have to point our finger at the reason for this year’s jump, we can point it at those pesky missed XPs[5]. Let’s walk through the math. This season, 39% of the time a team misses an XP, they finish the game with a weird score. In 2015, 71 such misses have led to 27.5 missed XP-induced weird scores[6], or 27.2% of all weird scores. (The other misses did not result in weird scores.)

​On top of that, the new XP distance has triggered the most 2P conversion attempts per game since 1998. If the NFL didn’t move the XP back, we’d likely have around 58 2P attempts through Week 17 (rather than 94), good for 18 2P-induced weird scores (rather than 29)[8]. That means that we have 11 “additional” weird scores in 2015 as a direct result of 2P conversions, the increase in which is itself a result of the new XP distance. Without the extra 2P tries and missed XPs, we’d have 65.5 weird scores in 2015 (not 101), at 12.8% frequency (not 19.7%). In other words, without the XP rule change, 2015's scores would be average[9]; instead, they are the weirdest in history.
IV. The Math Behind When Each Variable Causes a Weird Score [if you’re interested]

As we’ve discussed, there are five ways for scores to become weird: made FGs (4FGs, 5FGs, or 6FGs by one team), missed XPs, 2P conversions, safeties, and overtime TDs. And again, just because one of these events occurs does not guarantee a weird score. On Sunday of Week 13, there were nine missed XPs (more than each of the last four seasons in their entirety), but only two caused or contributed to a weird score. It all depends on what other scoring the team does in the game.

​As you read through the descriptions below, “all else normal” means that the only other scoring in the game is TDs, XPs, and FGs – no other “weird” variables are present. As noted, this certainly isn’t always the case. Instances of multiple variables or multiple instances of a single variable can combine to produce weird scores or offset to normal scores, shrouding these variables in a cloak of normalcy.

More FGs per game over time has meant more such games, though 5FGs in a game remains relatively rare, occurring 193 times in NFL history and causing a weird score three times thus far in 2015. 6FGs in a game has been accomplished only 29 times in NFL history, with no occurrences this year and five in the previous four years. We've seen 7FGs in a single game six times in history, including Week 4 of 2015 (Cairo Santos of the Chiefs), but 7FGs is worth 21 points, and therefore produces a normal score.

(3) 2P Conversions – 2Ps are a little more complicated. All else normal, a missed 2P results in a weird score in the same situations as a missed XP, namely TDs+XPs and 2FGs, 3FGs, or 4FGs. In Week 10, the Jaguars missed a 2P in a game in which they had 2TDs and 3FGs. With normal XPs, they would have had 23 points (normal). Instead, they missed a 2P and finished with 22 (weird).

​A made 2P results in a weird score when the team has TDs+XPs and 0FGs, 1FGs, or 6FGs. In Week 13, the Dolphins scored two TDs, made one XP, made one 2P, and finished with 15 points (weird). These scenarios can change if the 2P conversion attempt occurs in the same game as a missed XP, or something else weird, at times compounding the weirdness and other times offsetting it.

(5) Overtime TDs – All else normal, an OT TD produces a weird score in the same situations as a missed XP or 2P, namely TDs+XPs and 2FGs, 3FGs, or 4FGs. After all, nonexistent XPs, missed XPs, and missed 2Ps are really the same thing. They take us back to the game’s roots and original design, reminding us that TDs are really only worth six points, and that NFL scores are as dynamic and ever-changing as the rules that govern them and players that produce them.