It’s a feeling familiar to anyone who flies. Your plane lands at its destination and taxis to the gate. You hear that friendly “BING,” the cabin door opens, and people begin to stand up and make their way off the aircraft. In the mind of the passenger, the “BING” means that you’re safe and free.

But unless you’re in first class or the very front of the plane, your body knows damn well that you aren’t free just yet. There’s a seemingly endless ocean of humans in front of you, all stacked in the seats and aisles waiting to deplane, many with bags in overhead compartments, sometimes a few rows behind where they’re sitting, creating ever-crescendoing logistical chaos.

There’s no more open space, you can’t stand up straight unless you’re in the aisle, and you can no longer see the front of the plane that you so desperately want to make your way towards. The collective impatience builds. You hear a few people complain about how long it’s taking and (condescendingly) wonder if this is their first time getting off a plane. You feel good about yourself because you’re sitting quietly in your seat watching Instagram Stories until it’s your row’s turn to exit. (Except for the times that you're not.)

But then you notice that the people in the row behind you are creeping up into your row’s aisle space, seemingly poised to break the unwritten rule of letting everyone in the rows ahead of them exit before they do. Maybe they have a connecting flight to catch. But I bet they fucking don’t. So I’m gonna box these sunzabitches out and make damn sure I get off the plane before they do. Maybe I’ll even take my sweet-ass time getting my suitcase down. Or stare at them a little. Or say something to my travel companion that I really mean for them to hear. But probably none of the above.
The Xs and Ys of This "Experiment"

The deplaning process is a classic study in human nature and expectations. You think it’s over but it isn’t. The doors are open but you can’t leave. You’ve been jammed up in coach for a couple of hours and your brain and body want to break free. You can’t. You have to wait. But for how long?

To answer that question, I measured the amount of time between the opening of the airplane door – at which time passengers can stand and begin to exit – and my physical exit through that door. In other words, this analysis covers "cabin-door opening to exit onto jetway" – it does not account for any time spent on the tarmac or taxiing to the gate.

In layman’s terms,[1] these are all planes with six seats per row in coach – A, B, C on one side of the aisle and D, E, F on the other (yet surely somebody in or near your row is gonna manage to screw that up). Exact seating layouts otherwise vary by manufacturer, model, airline, and “version.” (More on that below.) For purposes of this analysis, assume the flights were full, I almost always had a bag in the overhead compartment, and I almost always sat in a middle seat (B or E).[2]
How Long It Takes to Get Off the Plane Based on Your Official, Ticketed Row

If you take a closer look at the chart, you'll see that the wait time per row is not consistent throughout the cabin. The purple trend line suggests that passengers toward the front of the plane have a 35ish-seconds-per-row wait, while people in the back are in 20ish-seconds-per-row territory. In other words, it seems like exit speed per row increases and wait time per row decreases as we move farther back in the plane – pretty significantly, I might add.[3]  ​ 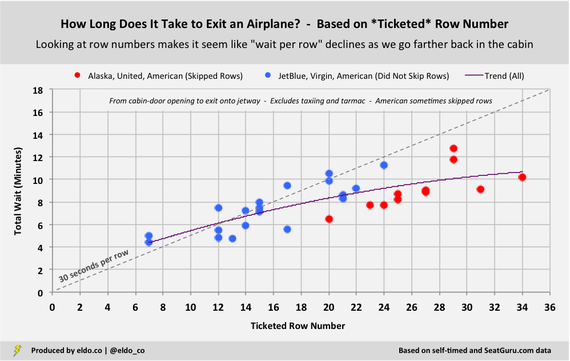 But these results are misleading because the Alaska, United, and American flights in red skipped certain rows – sometimes just a few between first class and coach, and other times a whole strange series, like this United Airbus A320 with no rows 4-6, 9, 13-19, or 33. In this study, all of the United flights, the one Alaska flight, and four of the seven American flights had whacked-out row numbers. The biggest difference came on a United Boeing 737-800, when my seat in 27B was physically located in the 15th row of the aircraft.

​We need to factor skipped rows into our analysis. So let's do that.
How Long It Takes To Get Off the Plane Based on Your Actual, Physical Row

​Below you’ll find the very same chart as above, only here I’ve replaced the official row number on your ticket with your actual row number (i.e., if you physically counted what row you’re in).

[To be fair, there is still some decline in wait time per row as we move toward the rear of the cabin. But I'm a little light on data points from the very back of the cabin, and I'm very light on data points from the front. Those two results from row seven, both coach, drag up the front end of the curve, and they're the only results through row 12. So we definitely need a little more data up front!][4] 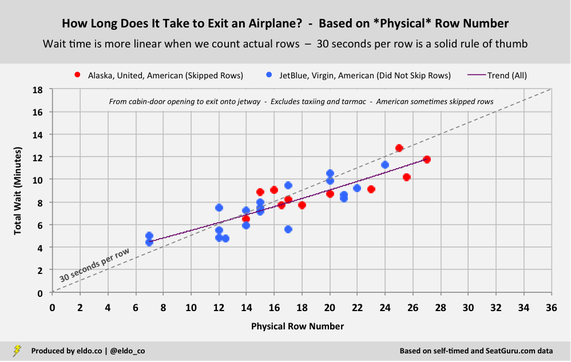 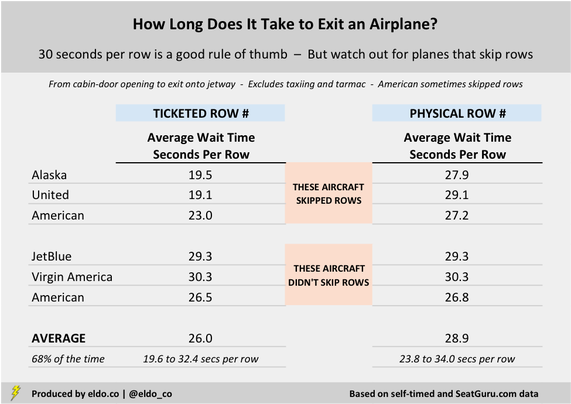 American's 26.5 vs. 26.8 sec/row is due to half a missing row
If your plane doesn't skip any rows, look at your row number, divide it by two, and that’s your estimated wait time in minutes. If your plane does skip rows, it's still going to take you about 30 seconds per physical row to get off the plane, but it'll probably take you closer to 20 seconds per numbered row to exit, in which case you can look at your row number and divide by three to estimate.

But that's a lot to think about, and nobody really pays attention to whether the aircraft is skipping rows. So my simple advice would be to stay seated, tie your shoes and zip your personal bag (located under the seat in front of you because you're not the type of person who puts their backpack up top), keep your headphones in and in-flight TV on, and assume you're waiting half-a-minute per row.
Postscript

We could keep this going, because what ultimately matters most is the number of people seated in front of you on the plane. That’s influenced not only by the quirks of official row numbers, but also by how much first- and business-class seating there is on a given aircraft (and how full the flight is, of course). Other factors matter, too, like how many bags those people are storing in the overhead bins.[5]

If we had enough data and really wanted to go nuts, we could probably even churn out an equation that factors in all of these variables. But the same way very few people are going to figure out what actual, physical row they're in, even fewer are going to count how many actual, physical humans are seated in front of them on the airplane. So for practicality's sake, I've kept "wait time per person" out of this analysis.

If you're curious, our little 30-flight sample included everything from American’s Airbus A321-Transcontinental – for which the entire front half of the cabin is taken up by five rows first-class seats (two per row) and five rows of business-class seats (four per row) – to JetBlue’s Airbus A320, which has no luxury seating. Of course, having one or two first- or business-class seats on each side of the aisle means that only two to four people per row need to gather their belongings and exit, as opposed to six tightly packed humans per row in coach. So more luxury seats should make for quicker exits, especially when you're right behind (or in) those seats.

​But again, the goal of the previous sections was to give you a broadly applicable way to estimate how long it takes to get off an airplane once the crew has opened the cabin door. "Thirty seconds per row" gives you what you need, and you don't have to worry about figuring out how many rows are missing (if any), how many people are in front of you, or how a specific airline's seating structure factors in.

​Finally, if you're the kinda cat who likes to think about how much money your time's worth, you could take a closer look at these results to figure out whether "economy-plus" type seating that places you toward the front of coach is worth it to you. If you're not checking a bag, rows five, six, seven and so forth could save you 10-15 minutes over the back of the plane. Do your math and do your thing : )

[3] I need more data from the front of the plane. Those two "row seven" data points, both coach seats, drag up the front of the trend line. For all we know they could be higher-than-trend results. One came on an American flight with four rows of first class in front of me, which makes the high result seem counter to expectations (i.e., there were fewer people in front of me per row, so you'd think I'd get off more quickly). The other came on a JetBlue flight with no first class.

[5] Which I imagine would vary based on destination, day of the week, time of day, and the like.
Times for this story were self-measured. The primary data source for airline and airplane seating configurations was SeatGuru.com. Data was compiled and analyzed by ELDORADO. All charts and graphics herein were created by ELDORADO.