ELDORADO
Hamilton is diverse, but is its audience?
MAR 3 2016
Tweet Follow @eldo_co
The Broadway musical Hamilton is a cultural phenomenon. Its style is unprecedented, its box office receipts are record-breaking[1], and Lin-Manuel Miranda – its writer, composer, and star – is electric. From the Grammys to 60 Minutes to your Facebook News Feed, Hamilton is everywhere[2]. And given what you see, hear, and read, it’s easy to start to think that "everyone" – or at least "everyone" in New York – is going to see it. Whatever that means.

On an episode of the Bill Simmons Podcast in January, best-selling author Malcolm Gladwell appeared to agree: “Two or three times a year there is a non-sports cultural happening that everyone… if you live in New York City, it’s the musical Hamilton… has that same… basically everyone is… if they haven’t seen it, they’re like trying to see it.”

While we shouldn’t take Gladwell’s “everyone” reference too literally, his remark is notable in that it is un-Gladwellian. It seems the writer who brought some of the hidden effects of social networks and unconscious bias into the mainstream fell victim to the very social phenomena he helped popularize, proclaiming that “everyone” in New York City is going to see Hamilton, when in fact that “everyone” is more likely limited to people in his network.

At the very least, Gladwell’s comment is cause for inquiry, prompting us to take a deeper look at just how many people are actually going to see Hamilton, and who those people are. Let’s explore.
How many people have seen Hamilton?

Let’s start with the more straightforward question of how many people have seen Hamilton. We’ll include Off-Broadway[3] and Broadway, previews and official performances, and assume no one’s seen it more than once[4]. 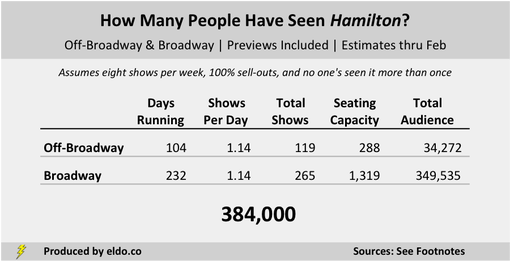 Off Broadway, Hamilton ran at the Public Theater in Manhattan’s East Village[5] from January 20, 2015 through May 3, 2015 – a total of 104 days. We don’t have Hamilton’s exact performance schedule, but the theater generally runs eight shows per week, meaning there were around 119 Off-Broadway performances of Miranda’s hit musical.

The Public houses five distinct venues; Hamilton ran in its largest, the Newman Theater, which has 288 seats[6]. And it appears the show was sold out from the very start, with secondary market tickets starting at $500 on Craigslist hours before its official Off-Broadway opening on February 20. 119 performances to 288 people means that about 34,000 saw Hamilton Off-Broadway[7].

On Broadway, Hamilton opened for preview at the Richard Rodgers Theatre on July 13, 2015. February 29 marked 232 days running, and at eight performances per week, that’s 265 Broadway shows. The theater’s published capacity is 1,319 – and the show is most definitely sold out – so around 350,00 people have seen Hamilton on Broadway.

The question of how many New Yorkers have seen Hamilton is a little trickier. Here we’ll define New Yorkers those who reside in one of the city’s five boroughs.

We adjusted our projections based on these factors[9], estimating that New Yorkers account for 23.6% of the 350,000 people who have seen Hamilton on Broadway through February, for a New York City total of 82,500.

Now that we have an idea of how many New Yorkers have seen Hamilton, let’s consider who goes to Broadway shows, using the Broadway League’s “The Demographics of the Broadway Audience, 2014-2015” as our primary reference.

Broadway audiences are also affluent. The average household income for American theatergoers last year was $205,366[13] – four times the United States average and in the top five percent nationally[14]. Showgoers from New York City had an average income of $175,200[15] – over three times the city average and in the top ten percent for New York[16]. 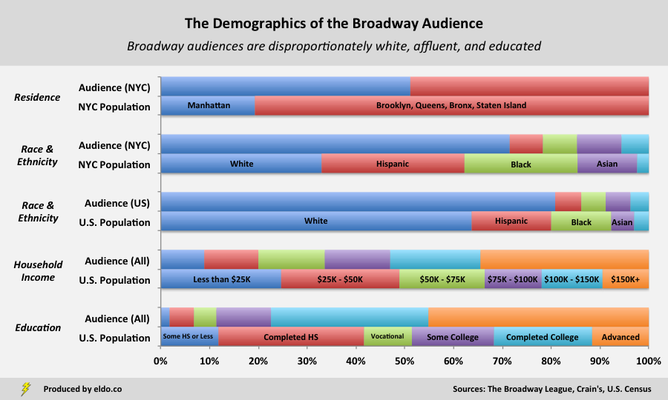 While the overall demographics of the Broadway audience are informative, they leave us to speculate on a number of Hamilton-specific factors. For example, Broadway shows or major hits might initially attract even more local crowds than we adjusted for above, which would add more New Yorkers to our previous estimate[19]. Then again, transcendent shows are historically – and unsurprisingly – wildly popular with both tourists and locals.

Hamilton’s tickets sell on the secondary market for several times the Broadway average[20] - their average starting price for the next sixty shows is $600 - so its audience may well be even more affluent than is typical. On the other hand, the show is such a sensation that some fans have been willing to pay no matter what.

On top of all of that, Hamilton’s style and story appeal to a wider audience than the older, white, female crowd that is characteristic of Broadway[21]. But without audience-specific data for Hamilton, we don’t yet know if its on-stage diversity is being reflected in the seats. (It very likely is not.)

Nevertheless, we know enough to know that about one percent of New Yorkers have seen Hamilton, and it is likely that most occupy some sort of upper or upper middle class[22]. So while everyone in Gladwell's New York City might be going to see Hamilton, it's pretty safe to say that everyone in New York City is not. And it serves as a reminder to all of us to think beyond our own circles and norms, as Malcolm Gladwell would otherwise have us do, and challenge the status quo, as Lin-Manuel Miranda has so powerfully done with Hamilton.

Our reference to Gladwell’s comment is not intended as an overly literal or overly critical interpretation of something he said in the middle of a free-flowing conversation. But it was memorable and ironic for the reasons described above, and it truly was the origin of this article. Whatever your opinion of Gladwell's style or at-times "cherry-picked" science may be, we've read his books in the past and have him, at least in part, to thank for encouraging us to question assertions like the one he made on the Simmons Podcast.

Our primary source for "who goes to Broadway shows" is The Demographics of the Broadway Audience, 2014-2015, published annually by the Broadway League since 1998. The complete 55-page report is available for sale on the League's website. For those interested in audience trends, ticket purchasing habits, and consumer preferences, the report is a very good read. We certainly welcome more nuanced input (e.g., on whether Broadway audiences are indeed more "local" when plays open) and more specific input (e.g., on the Hamilton audience) if available and substantiated.

Now that Hamilton is such a sensation, it is fascinating (and a little bit funny) to go back and read its Off-Broadway reviews, articles wondering "how it will be received by broader audiences over time", whether it could sell out the Richard Rodgers Theatre, and whether it would be "the next 'Book of Mormon' ... or 'Bloody Bloody Andrew Jackson'", which closed in three-and-a-half months after a hit run at the Public. If all of that sounds ridiculous to you now, then you might check out Malcolm Gladwell's article "Connecting the Dots", an interesting read on hindsight bias.