ELDORADO
Margins of Victory through NFL History
Despite its weird scores, 2015 had the most "normal" margins of victory in NFL history
​FEB 23 2016
Tweet Follow @eldo_co
﻿In recent months, we devoted a great deal of attention to exploring and explaining 2015’s weird NFL game scores, which ultimately proved to be the weirdest in history (by far)[1]. 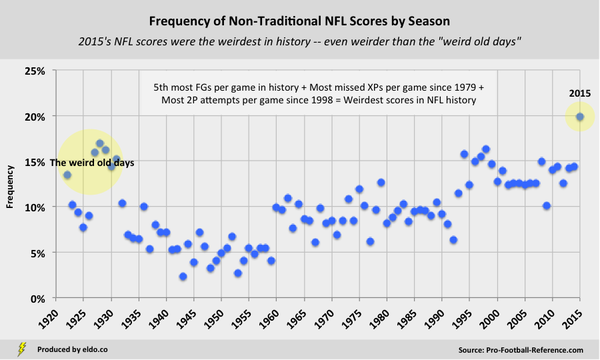 ​Beyond the cultural significance of seeing “traditional football scores” give way to 18-16, 35-18, 26-20, 20-18, and 49-15 (all in the 2015 playoffs alone) – and their annual impact on Super Bowl Squares probabilities – we began to wonder how weird scores might also affect margins of victory, which carry more practical implications than mere (and admittedly strange) intrigue.

Anecdotally, it sure seemed like 2015's weird scores were messing with traditional NFL margins of victory. Consider Steelers-Bengals in the Wild Card (18-16), Broncos-Patriots in the AFC Championship (20-18), or if Denver missed their two-point conversion late in the Super Bowl (and won 22-10 instead of 24-10)[4]. Think back to how it felt when your kicker missed an extra point (XP), you saw a line you thought was funky, or you lost a bet because you had a favorite minus 2.5 that missed an XP and won by two instead of three.

Were 2015's margins of victory actually different, or were we just paying more attention to the weird ones because of the new XP and strange scores? Let’s explore.

(Note: While it’s easy to point a finger at the new XP distance as the cause of weird scores, recall that the multitude of NFL seasons with XP conversion rates similar to or worse than 2015's rate (94.2%) produced very normal scores, including the most normal scores in NFL history. The new XP pushed us over the edge in 2015, but missed XPs do not explain weird score frequency on their own. Made field goals, missed XPs, and two-point conversions (which are influenced by XPs) together explain weird scores. The three variables never existed at such high levels at the same time until 2015, and that perfect storm combined to produce the weirdest scores in NFL history.)
I. Key Numbers

For a detailed look at winning and losing team score distributions and the sources of NFL points over time, check out The Trends & Scores Behind the Story​
From 1974-2014, an average of 45.0% of NFL games finished with a margin of victory of 3, 7, 10, 4, 6, or 14 (standard deviation of 3.55%). In 2015, 52.1% of games were decided by these “key numbers” – the most in NFL history. And so the season with the weirdest scores in NFL history gave us the most normal margins of victory in NFL history. 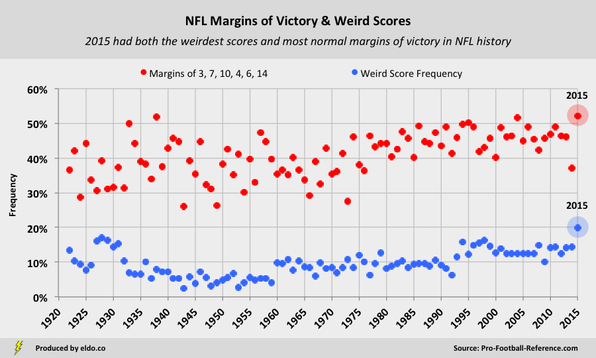 At the NFL’s League Meeting in Dallas on December 2, 2015, Commissioner Roger Goodell stated, “I don’t think we’ve ever had a more competitive season. Our margin of victory is near an all-time low, if not an all-time low. The number of games within seven points is in the same category.” 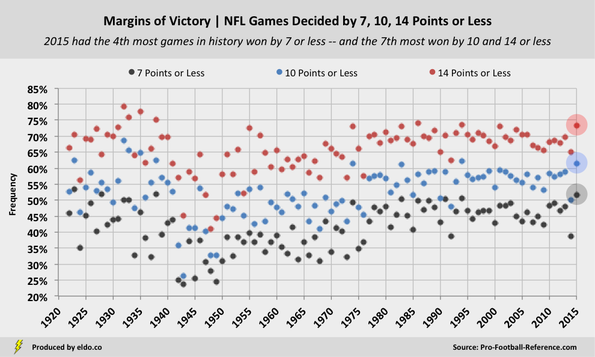 ​Our key numbers – 3, 7, 10, 4, 6, 14 – all live in these low ranges, so a high concentration of games decided by seven, ten, and fourteen points or fewer[9] increases the chances that “normal” margins of victory will occur. But close games are only half the story[10].
III. The Most Normal Margins of Victory in NFL History 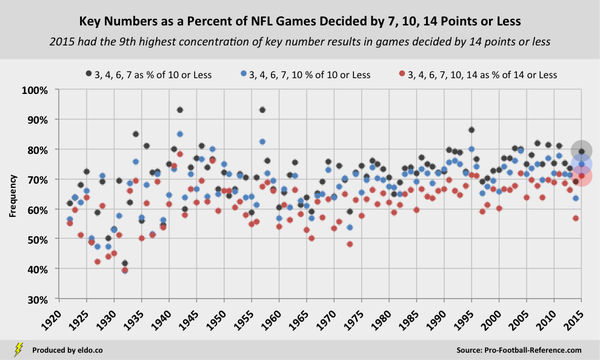 There are seasons with more close games and seasons with a higher concentration of key number results within close games, but 2015 is unique in that it is near all-time highs for both[11]: 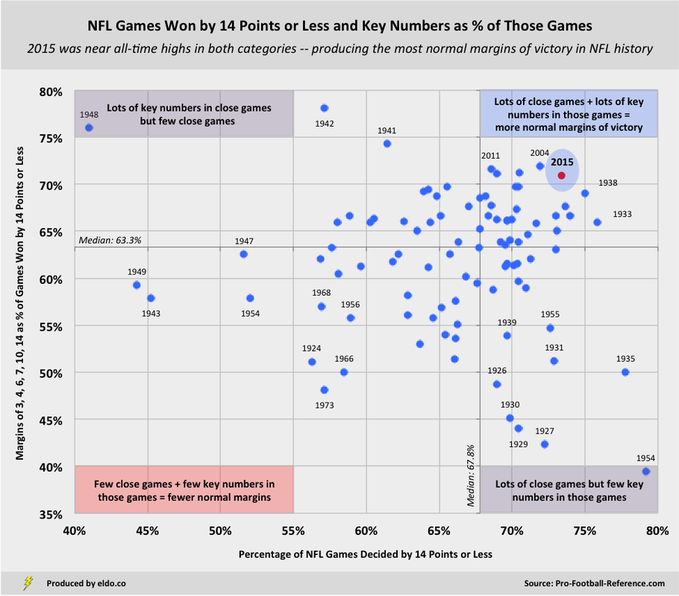 So despite the recent anecdotes, missed XPs and two-point conversions that so memorably won or lost you bets, and season-long speculation that the new XP and weird scores were bastardizing NFL margins of victory, 2015 ultimately proved to have both the weirdest scores and the most normal margins of victory in NFL history.

While 2015's weird scores created very few normal margins, it is possible that 2015's weird scores produced more normal margins than did weird scores in previous seasons. Exploring that would require a game by game analysis of each of those weird score games across seasons. It is also possible that 2015's games without weird scores produced more normal margins of victory than similar games in previous seasons, due perhaps to variables such as the two-point conversion - as in the case of a team going for two to reduce a late-game deficit to three points (albeit five if they miss). However a preliminary look indicates that two-point conversions offer little in the way of explanatory power.