ELDORADO
Clinton-Trump Is the Oldest U.S. Presidential Election in History
​But relative to life expectancy are they really all that old?
AUG 5 2016
Introduction - Analysis
Appendix I: A Closer Look at Democrats and Republicans, Clinton and Trump
Appendix II: The Oldest and Youngest Candidates in History (Relative to Life Expectancy)
Tweet Follow @eldo_co
Analysis

Let’s start with the more straightforward stuff. This is the election-day age of every presidential candidate in U.S. history who has won - or projects to win - at least 10% of the popular vote[1]:​ 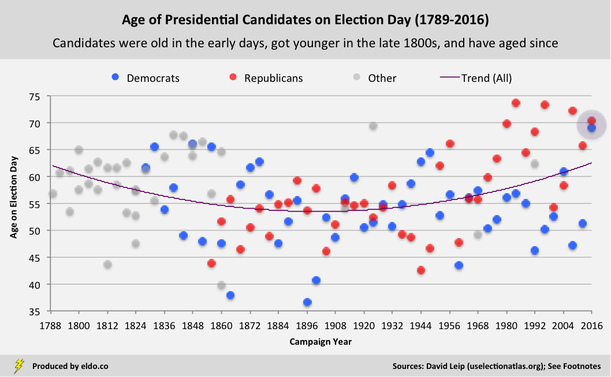 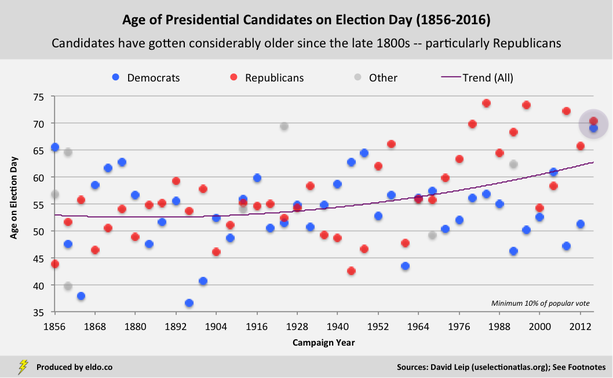 But when we look at age in context of life expectancy, we find that little has changed: 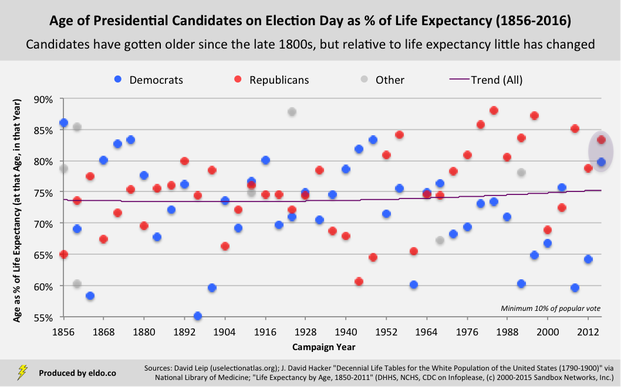 That is to say, when we consider where these candidates are in their lives when they run for president – or what percentage of their projected lives they’ve already lived – our purple trendline is rendered nearly flat. Even though modern-day candidates are considerably older than they were a century ago, they are running for president at pretty much the same point in their lives as their counterparts 50 and 100 and 150 years ago.

But even after we adjust for life expectancy, Clinton and Trump hover above the trend. What, then, should we make of them? Here’s another look, this time showing the average age of candidates in a given election year: 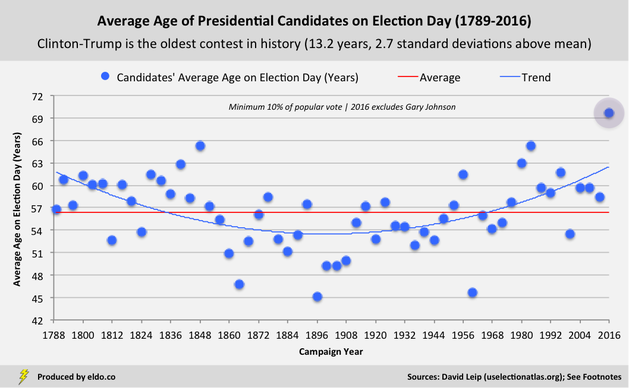 We already know that 2016 is the oldest presidential contest in history. Here we can see just how much of an outlier it is. With an average election-day age of 69.7, Clinton-Trump is 13.2 years and 2.7 standard deviations above the historical average (56.5 years)[3]. They beat their closest competition – 1848 (Zachary Taylor, Lewis Cass, Martin Van Buren) and 1984 (Ronald Reagan, Walter Mondale) – by almost four-and-a-half years.

When we consider age in context of life expectancy, Clinton and Trump lose a little bit of their elderly luster: 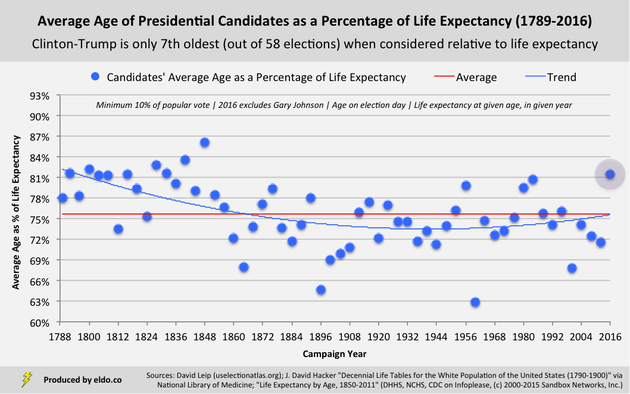 Relative to life expectancy, 2016 is the seventh oldest presidential election in history (out of 58), and it’s within striking distance (1.2 standard deviations) of historical averages (75.7%). It’s still an old election – the oldest since 1848[6] – it’s just not as old or unique as it might otherwise seem.

In Appendix I, we take a closer look at Democrats and Republicans, Clinton and Trump. In Appendix II, we rank the oldest and youngest presidential candidates in history, relative to life expectancy.
​Footnotes
​[1] ​Gary Johnson currently projects to win 6.6% of the popular vote, which may very well change. For now he is excluded. The National Archives and Records Administration lists no official record of the popular vote until 1824. For purposes of this analysis, we applied common historical convention and incorporated two major candidates from 1796 through 1820 and one major candidate in 1788-89 and 1792 (George Washington) into our analysis..
[2] The first presidential election began on December 15, 1788 and ended on January 10, 1789. It is commonly referred to as the 1789 Presidential Election, which is why we elected to use 1789 in our chart headers. For purposes of this analysis, we used George Washington's age on December 15, 1788. For all other elections, we measured birthdays as of November 1 of the given election year. And for that reason, Washington's two election-day ages are 3.9 years apart, rather than a clean four.
​[3] 56.5 is the historical average when you weight elections equally. 56.4 is the historical average across the 124 unique candidates in our sample. Even with the inclusion of Gary Johnson, 2016 would be the oldest presidential in history (67.7 years). It would be 11.2 years and 2.4 standard deviations above the mean.
​[4] Ages are presented as of Election Day. Clinton celebrates her 69th birthday on October 26, 2016. Trump turned 70 years old on June 14, 2016. American females have greater life expectancies than American men.
[5] George H.W. Bush was 64.4 on November 1, 1988; Dwight D. Eisenhower was 62.1 on November 1, 1952.
[6] Since 1852, the average "age as a percentage of life expectancy" is 74.0%, with a standard deviation of 7.5%. Clinton-Trump is 1.9 standard deviations above that mean.
Sources

For life expectancies, 1900 and earlier: Hacker, J. David. "Decennial Life Tables for the White Population of the United States, 1790-1900." Accessed via PubMed Central, a full-text archive of biomedical and life sciences journal literature at the U.S. National Institutes of Health's National Library of Medicine. Published in final edited form as "Hist Methods" 2010 Apr, 43(2): 45-79. J. David Hacker is a Professor at the University of Minnesota.

In the source data, ages are presented in increments of five or ten years. Years are presented decennially or for specific years. For candidate ages and election years that fell between (or after) those presented, I interpolated (or extrapolated) life expectancies based on the data available.
﻿﻿Data was compiled and analyzed by ELDORADO. All charts and graphics herein were created by ELDORADO.